Blamdown is a fast-paced twin stick shooter about a cow with a bazooka and a lust for revenge.

Blamdown: Udder Fury is all about creating chaos, blowing stuff up and having a blast doing it. The game lets you jump on top of buildings, take out burger joints and gun down enemy jetpack-troopers and tanks. Battle your way across the American continent to avenge your girlfriend Rosa, who ended up as a Captain Patriot™ hamburger. 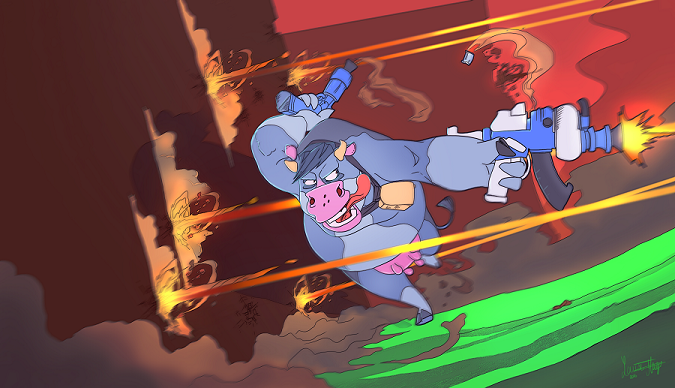 The game is a classic love story about Moonalisa, who fell for her herd mate, Rosa. The two would have lived happily ever after (and this game would have been a cow dating sim instead) if not for an unfortunate event involving a hungry farmer and a meat grinder. After the "accident" Moonalisa was, naturally, rather pissed. After all, how would you feel if someone made a hamburger out of your girlfriend? Yeah, thought so.

She decided that all humans were at fault for allowing this atrocity to happen, and did the only thing she could think of to numb the pain: She somehow grew a pair of hands, stood up on her hind legs and grabbed a hold of a conveniently placed machinegun. The rest is a real barn burner, but it is up to you to guide Moonalisa, the bovine berserker, on her road to end human civilization in what the Mayans prophesized as the Cowpocalypse.

"Meat is a murderer"