“After many months of development, Atomic Space Command is ready to be seen by more fans of space combat! We want to hear from you about the direction we take with the game, and Early Access is the best way for a small independent studio like us to do so.

So buckle into your space chair, cadet, buy the ticket and take this ride with us!”

“We expect the game to be in Early Access for three to six months. But as we all know, no battle plan survives contact with the enemy!”

“Depending on what YOU, the audience tell us you want over the course of the Early Access, the full version of Atomic Space Command could have features like:

We like to focus on the fun things first and will prioritize the work on regular releases during Early Access with that in mind. Please keep in mind that since this is complex game with lots of network gameplay, it's likely things will be broken, account progress will get wiped, matches will be dropped in the middle, and so on - so expect the unexpected, nugget!”

“Atomic Space Command is at Alpha, which for us means:
”

“We are planning on regular builds being pushed to those who buy Early Access along with an anonymous feedback form. We will use the Steam Community Discussions and our forums on atomicspacecommand.net to gather feedback and suggestions for the next release.

Also find us and follow/like/subscribe/love us at the following internet locations:
” 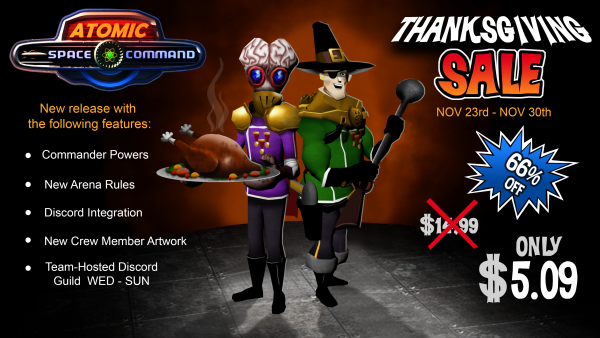 Atomic Space Command is a multi-crew co-op/competitive spaceship combat game played in a Solar Arena. Our vision for this game is to make it like when you were a little kid, playing with spaceship toys in your room with your buddies, putting them together and flying them into battles!

*NOTE THIS IS A BETA VERSION* We are looking to work with fans to iterate the game and make it super extra awesomesauce! But since it is early days we have a lot of things to fix and improve, so please don't be shy in sharing your thoughts on the Atomic Space Command Steam Discussions.

The pricing reflects what we need to keep our small indie dev studio going, so please support us in these early days! THANK YOU!

You are an Atomic Overlord competing for the coveted Spice Atomic. Often teaming up with allied Atomic Overlords (your friends), you field co-op armadas to battle across the solar system, build on planets, and extract Spice Atomics to claim victory!