“Even at this early stage, we think that SQUIDS FROM SPACE is pretty fun and ready for players to start giving us feedback. Rather than just continuing to work on it behind closed doors, we want to get players playing and letting us know what they like, what they'd like to see in the future, and what they'd like to see tweaked and changed.

Fun Bits is a small 6-person team, and a big advantage of that is that we can be very responsive to feedback from our community. Join our Discord server (https://discord.gg/squidsfromspace) to give us feedback and participate in shaping the game as we truck onwards towards launch day!”

“SQUIDS FROM SPACE will be in Early Access for at least a year, but due to our small team size it will likely be longer than that before we're ready for a full release. However, we are planning to update the game with bugfixes, new features, updated visuals, and similar upgrades every 1-2 months, so make sure to check back if you haven't played in a while!”

“The first Early Access release version has one map, a core set of about 15 weapons and vehicles, no character customization options, and visuals that we do not consider to be final art.

The launch version is planned to have at least five maps, additional weapons and vehicles, a robust character customization system, customizable game modes, and improved visuals. The exact features and content will be in the launch version will depend on what players indicate they want to see in the game via player feedback.”

“The first Early Access release is considered to be our first "vertical slice" Alpha version. That means we consider the gameplay and core features to be playable and fun. Visuals are not final, some non-core features are not yet implemented, and there is a lot of content that we would like to add. By the time you read this, we'll probably have added much more!”

“SQUIDS FROM SPACE is free to play, but if you participate in the game during Early Access you'll receive special rewards when we launch!”

“Join our Discord server (https://discord.gg/squidsfromspace) to give us feedback and participate in shaping the game as we truck onwards towards launch day! We will also be monitoring feedback given in Steam reviews and on our forums.” 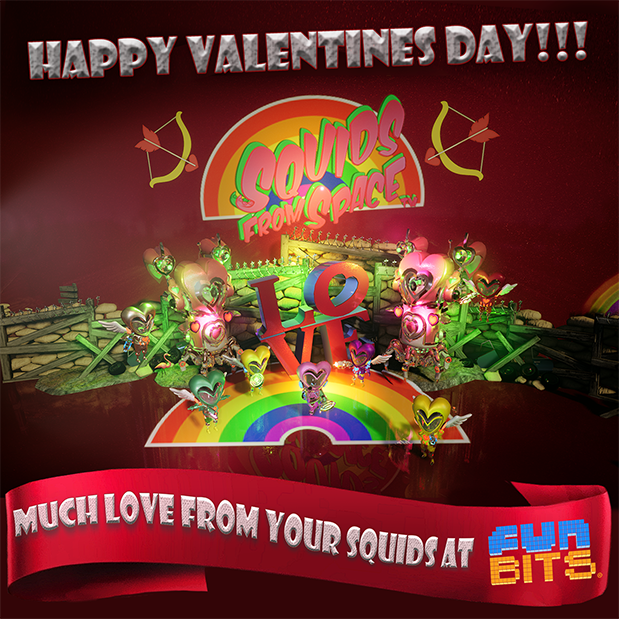 SQUIDS FROM SPACE is an 8v8, team-based tactical PvP top-down shooter where the Earth is under attack from a race of sinister aliens -- The Squids! Taking place in a retro 1950's setting, the people of Earth must unite and fight back, pitting human weapons of war against the Squids' bizarre technology in a battle for the future of the planet!

We have a Discord Community that anyone is welcome to join! Get instant interaction with the creators of SQUIDS FROM SPACE. Ask questions, voice concerns, share your ideas, and share your creative content (videos, streams, art, etc) with others.