Quar: Battle for Gate 18
Developer
Steel Wool Studios
Publisher
HTC
Quar: Battle for Gate 18 is a turn-based strategic VR game set in the grimsical world of Alwyd. The Quar are cute alien ant-eaters. Don't mistake cute for gentle. They use their WW1 level technology to wage war across the face of their world.
All Reviews:
Very Positive (52) - 90% of the 52 user reviews for this game are positive.
Release Date:
Developer:
Steel Wool Studios
Publisher:
HTC
Tags
Popular user-defined tags for this product:
Strategy Action VR Indie
+
Reviews
All Reviews:
Very Positive (90% of 52) All Time

Quar: Battle for Gate 18 is a turn-based strategic VR experience set in the grimmsical world of Alwyd!

It seems the Quar have always been at war. When the first wandering clans of insect gatherers built their low, mud-walled buildings, it was as much to keep out other Quar as the wild animals. As they first learned to make tools to get food, they quickly learned to make tools to defend themselves. The mud walls quickly became fortified citadels, and then city-states. In five thousand years of civilization, the constants of their culture have been the changing of the seasons and the threat of war.

For the last 700 years the Quar have been waging The Long War to a bloody stalemate that has wracked their world. But the balance of power is shifting and Alykinder’s Crusade is attempting to end The Long War by conquering all the Quar nations. This game takes you to one battle in one theater of The Long War: the Battle for Gate 18 between the Crusader Army and the Royalist Coftyran Crymuster.

Command cavalry to sweep the enemy's flanks. Send Baeliog armored tractors forward to shatter hardened defenses. Your rhyflers are armed with weapons ranging from the humble Bogen rifle to heavy-automatic shotguns. Rely on your stalwart officers to keep up your troop's morale and to call in deadly airstrikes. But above all, preserve the honor of your cause as you wage the Battle for Gate 18! 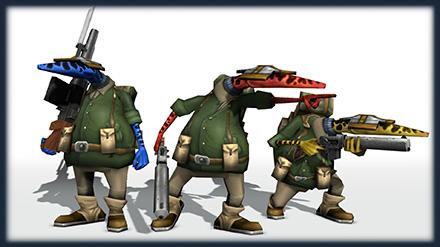