“Considering the scale we would like to achieve and the time it will take to reach the full array of features we plan to deliver, it makes sense for us to allow our fans and the wider public access to the game while it is still in development. The nature of the game allows us to take very clean vertical slices (for example, infantry combat, vehicle combined arms warfare) and expand on them while we continue to develop new features in other areas. This allows the community to enjoy and support the game and its developers while work continues, a scenario which our development team is very familiar with, coming from a modding background where fast iteration and immediate player feedback are important.”

“We are anticipating for Squad to launch sometime in 2020.”

“In the full version, we are aiming for the support of 100 player servers with 50 players on each side. In addition what we have planned are a full compliment of vehicles for each faction, which goes from the small (motorbikes), all the way to helicopters. Lastly we intend to fully flesh out the Base Building system by including more deployables, refining the construction and supply systems.”

“It has yet to be determined whether the price of the game will change during or after early access.” 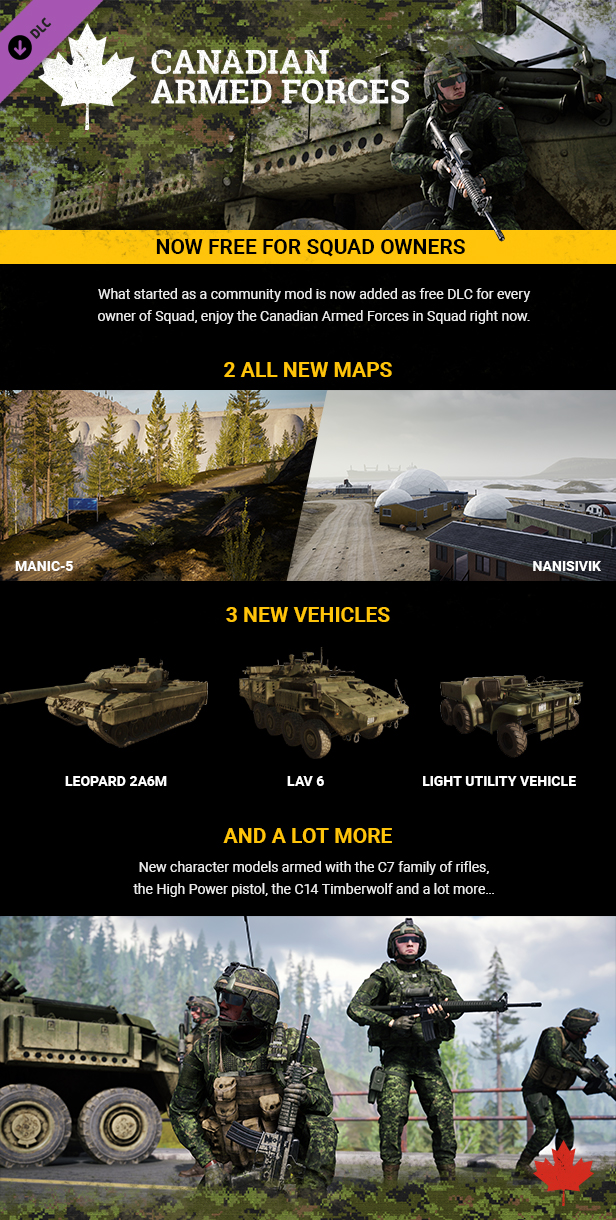 Pitting several conventional and unconventional factions against each other, Squad aims to create authentic combat experiences utilizing a sense of being a part of something greater than yourself. Pick a side and become a member of a nine-man squad with your team to face off against 40 other players in intense, large combat environments. Squad features the US Army, Russian Ground Forces, British Army and Irregular Militia and Insurgents with their own unique arsenals.

Do you hear the sound of rumbling and grinding gears? Do you fear the inevitability of your short life at the end of a T-72 Main Battle Tank barrel? Get your Squad Leader to place down an anti-tank guided missile system and remove that pesky tank from the battlefield. In Squad, we provide numerous methods to adapt to the ever-changing needs of the battlespace. Place down emplacements like HMGs and AT guns, or build up a fortified position with sandbags, HESCOs, and razor wire.

The pinnacle of the Squad experience, communication is a soldier's best tool in effectively engaging the enemy. To help facilitate navigating the complexity of communication on the battlefield, we provide a world-class in-game VoIP system that allows you to talk to other soldiers locally, internally in your squad, between squad leaders, or squad leaders to the Commander. Also, we provide a plethora of other tools that fire team leaders and squad leaders may use to inform their squads and teams, such as map tools and in-world marking tools.