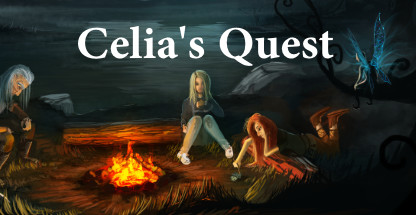 Celia's Quest
Developer
Duckvalley Productions
Publisher
Volens Nolens Games
Not long after Celia leaves her home to go on an adventure (and maybe, just maybe, to avoid getting married to Ced the creep) she finds herself in the village of Villageville, where she meets another runaway.
All Reviews:
Mostly Positive (25) - 76% of the 25 user reviews for this game are positive.
Release Date:
Developer:
Duckvalley Productions
Publisher:
Volens Nolens Games
Tags
Popular user-defined tags for this product:
Adventure RPG Indie RPGMaker Female Protagonist
+
Reviews
All Reviews:
Mostly Positive (76% of 25) All Time

Not long after Celia leaves her home to go on an adventure (and maybe, just maybe, to avoid getting married to Ced the creep) she finds herself in the village of Villageville, where she meets another runaway. Just as they are deciding to go search for adventure together, a group of remarkably rude bandits show up and kidnap Celia's new friend! Now it's up to Celia to save her friend, prove herself to the villagers in Villageville, and beat up all kinds of strange creatures living in the Valley.

Brawl, bomb and magic your way through hordes of enemies ranging from the almost-peaceful Angry Shrooms to the devastating Dragon Dragon! Meet new friends and companions like Guy the almighty fairy, an old man that's absolutely not a retired hero, pirates, bandits and an immortal mouth in a jar! Beat up monsters until they cry and turn those tears into potions! The possibilities aren't exactly endless, but there's a lot of them! Go forth, and above all else, please enjoy Celia's Quest!

Celia's Quest is a JRPG made in RPGMaker VX Ace with heavy emphasis on exploration and puzzle solving rather than grinding and leveling up. Forgoing classic level-up systems, Celia's Quest delivers player progression through Powerups spread throughout the world. This way the player is rewarded for exploring and solving puzzles rather than being patient. Celia's Quest focuses on enjoyment rather than an epic storyline or super dramatic monologues, and shies away from anything close to mature or grimdark. It is, simply put, a fairy tale. This fairy tale has many humorous moments and though it gets serious at times it's more of a comedy than a drama. Characters are over the top, enemies are silly and the world kind of makes sense... sometimes. Did you know dungeon waters are deeper than regular water? Did you also know that this is why dungeon water chooses to only reflect more profound things, such as stars?