The Last Dogma - Wilder Wein Edition
Developer
Sasha Darko
Publisher
Sasha Darko
HG101: "Like the beloved games of bizarre gaming auteurs, you kind of have to meet it by its own standards and not your own, and even then you may not like it. But if you do end up liking it, you may end up liking it a lot."
All Reviews:
Mixed (23) - 43% of the 23 user reviews for this game are positive.
Release Date:
Developer:
Sasha Darko
Publisher:
Sasha Darko
Tags
Popular user-defined tags for this product:
Indie Adventure Gore Violent First-Person Surreal Experimental Narration Abstract Singleplayer FPS Sci-fi Fantasy Exploration Great Soundtrack Funny Comedy Dark Politics Medieval
+
Reviews
All Reviews:
Mixed (43% of 23) All Time

“No matter how you come away from it, it’s the sort of experience you’re not likely to forget anytime soon. (Wilder Wein Edition Review)”
Positive – Hardcore Gaming 101

“It's a very surrealist take on a rapid descent into madness of current political affairs. There's enough plot ends going at any given time that it can be a bit confusing, but for my part, I rather quite enjoyed the sense of working out this bizarre world, and to it's credit it does work out. I also enjoyed the fact that beyond a simple overaching point there really isn't any judgement made here. (1.3b Review)”
Neutral – Highland Arrow

“This is a game for those who loves b-movies, absurd conspiracies, random LULZ, unconventional videogames that don't take themselves too seriously, Francis York Morgan and the narrator from Stanley Parable. The Last Dogma is a low-budget surreal story that plays with meta-references, social jokes, unpredictable stories and nonsense characters.”
Positive – We Are Complicated 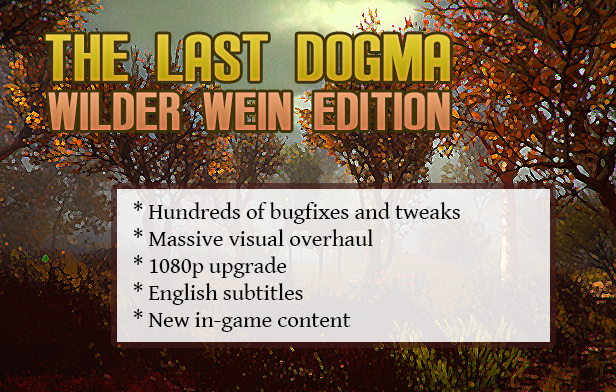 "As if George Carlin lived in Russia and one day decided to make a mod for Postal 2 which would be based on the story of Only If. Well, that's a terrible pitch, but I'm tired. Now would you be so kind to get your fuckin' microphone out of my face, stop asking me about your fuckin' game and just let me go?" - Random Man On The Street

"Crap", "Christianphobic trainwreck", "Mess" - Most trusted experts on the Internet

The Last Dogma is a surreal black comedy exploration adventure game set in the year 1999 of an alternate reality world, where US actively campaigns for world domination after being disappointed with the results of the Cold War. Inspired by the history of humankind, free of clichés and moral borders, made in Hell.

You play as Sebastian Arise, an ATF special agent tasked with the tracking and eradication of local firearms dealers. One day straightforward tracking mission turns into disaster, thrusting him into the village of cannibalistic Christian cult known as “Holy Intentions”. Entwined in a web of intrigues between emotion-feeding daemons, Sebastian must keep his senses sharp as he travels back in 1366 A.D. to stop the things he shouldn’t stop.

!
The game is a reimagining of Sacred Line Genesis, horror text adventure game for Sega Genesis / Mega Drive. And it's definitely not a shooter.
Recommended for fans of Killer7, Deadly Premonition, Only If, Postal, Normality and Pathologic (NOT INSPIRED by them), for open-minded people who prefer story and exploration over action / mechanical gaming and for people who are still looking for secrets in the games they play. Also for people who love movies of Richard Kelly, David Lynch and Quentin Dupieux.

Soundtrack DLC is now available on YouTube for streaming:
https://youtu.be/PLHPBRWPQtM

Legal-schmegal.
Just don't put it into a microwave.