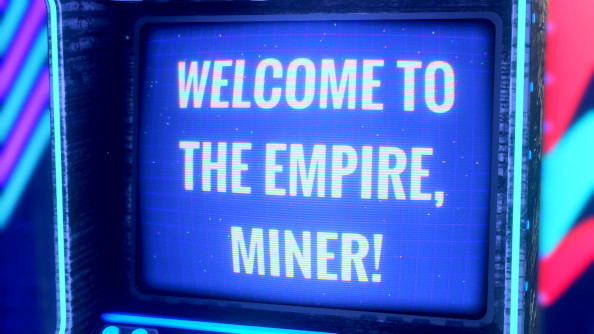 (This is an experimental companion experience to an alternate-reality game called 'Entropy'. To learn more, please visit: https://wiki.gamedetectives.net/index.php?title=Entropy)

Welcome to the Empire, Miner!

It’s 1984, and in the basement of a quiet arcade store somewhere in the UK, an experimental arcade machine is gathering dust.

The headline game: Our Nation’s Miner!
A game that puts the player in the shoes of a synthetic clone, waking up centuries too late into a spacefaring empire that has now been overrun with a peculiar mix of rogue AI.

But not everything is as it seems. The arcade machine holds dark secrets that need to be uncovered. Be careful not to fall down the rabbit hole...

Our Nation's Miner is an evolving project which ties into the grand narrative of an alternate-reality game called 'Entropy'. Over time, the game will be expanded and change in response to player interactions both inside and outside of the application.

This is a game with an ever-expanding collection of hidden features and secret paths. Players are encouraged to experiment and be the first to uncover these mysteries. Their discoveries may change the game forever.

This game is an experimental project. A significant amount of content is hidden behind secret features to coincide with an alternate-reality game called 'Entropy': https://wiki.gamedetectives.net/index.php?title=Entropy