“Quite frankly, because we’re trying something that’s never really been done before. While there have been a few games with Twitch-interactivity built in, Streamline was built from the ground-up with Broadcasters and their audiences in mind. We’re trying to make real-time interaction between the Broadcaster, their players, and their communities and, well, it’s hard to put that through its paces on our own.

On top of that very real need, we’ve valued open development and tight interaction loops with our community since the company was founded. Early Access allows us to hear what you think, what’s working, and what’s not, all out in the open for everyone to see.”

“Streamline will be in Early Access for approximately 6 to 9 months and we hope to release in the Spring or Summer of 2017. This should give us the time we need to gather and respond to feedback, ensure large-scale stability, and add the remaining features both Proletariat and the community want.”

“Through Early Access, we’ll be refining the game, fixing performance issues, and bugs, but most importantly, for the full version, we want to add some major features, possibly including:
We also want to explore bringing Streamline to other streaming platforms, such as YouTube, Beam, and Facebook Live.”

“Streamline is stable and fully playable. It’s already been played by hundreds of Broadcasters with thousands of players, in front of hundreds of thousands of interacting viewers on Twitch. Each game can host up to 16 players on one of five different maps, with dozens of Rules, Bonuses, and Accolades, along with hundreds of pieces of clothing.

Viewers can also use Streamote, a fully responsive website across their desktop, mobile, and tablet web browsers, to play along with the Streamline players.”

“Streamline is priced lower during Early Access as both a token of our appreciation to you, our early users, helping us to refine and improve the game, but also as a reflection of the work-in-progress nature of Streamline at this time. It is likely that this price will increase when we release the full game to reflect the many additions and improvements we’re making during Early Access.”

“We’ve always been a very community-focused company and with Streamline, we’re going even further. We have a Discord server that’s open to the public for real-time interaction and chat with and between the community and the developers. Members can use our Discord server to promote their own games of Streamline, organize with other players, give feedback, or just hang out.

We also have twice-weekly playtests of Streamline (at least!), streamed live on Twitch, and open to the community where players can join up with us, check out the current work-in-progress version of the game, and let us know what they think.

On top of that, we’ve stayed open and active on the Steam forums, Reddit, Twitter, and other community sites, both as a company and individual employees.”


Read more
Notice: At the request of the publisher, Streamline is unlisted on the Steam store and will not appear in search. 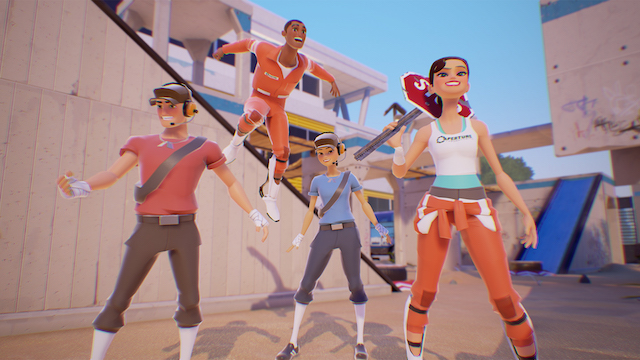 Welcome to Streamline, a fast-paced, third person game built for and around streaming. Take on the role of Broadcaster, Player, or Viewer and change the way the game itself is played!

Streamline has been designed and built from the ground up to be perfect for streaming. Broadcasters can easily make parties to play with their communities while stream viewers can bet on players, change the rules of the game in real-time, compete in mini-games, and more to become (in)famous on the stream, all by using Streamote.tv, a unique website integrated on desktop, mobile, or tablet. Streamline is the perfect game for Sub Sundays, Follower Fridays , or just playing together with your friends.

Throughout Early Access, Proletariat is developing multiple game modes for Streamline, each featuring one or more broadcasters, up to 16 Players, and tens, or even hundreds of, thousands of Viewers. In the first mode, ‘Elimination’, players free-run around the maps, gather points, and avoid the competition. The Hunter tracks down the Runners and eliminates them from play while streaming to the Viewers. Viewers can bet on the best Runner to win big, change the rules of the game in real-time, and play mini-games like Bingo. Give your Runner an edge by turning the floor into lava or bringing them back from the dead or help the Hunter by restricting the Runners’ movements or making them explode if they touch each other!

The Story So Far

Set in the near future, Streamline pits Runners vs. Hunters in a new sport enhanced by augmented reality and physical skills. After growing tired of mainstream sports with their limited mechanics, overblown sponsorships, and corporate greed, the Streamline Pro League was formed. Taking advantage of their dilapidated surroundings, players in the SPL run, jump, and fly through abandoned shipyards, vacant schoolyards, and crumbling skyscrapers while live streaming all of it to their adoring fans. Runners want to gather up as many points as they can while avoiding the Hunter. If they’re eliminated, they become Ghosts who stay in the game to haunt or help other players.