“Soul Saga is an incredibly unique hybrid of genres that requires fan feedback to get just right.”

“Until fans feel the game is ready.”

“Soul Saga's current state is just a base to add more to.

Many core gameplay elements are implemented including airship exploration, turn based combat, delegating quests to idle Guildmembers, and the three world bosses.

Right now there is a temporary story that will be replaced later.”

“I want fans to get the most value for their contributions, so the fans will help me decide how to handle pricing.”

“Soul Saga's incredible community has always been the most important element to its success. I am eternally grateful for them and will continue to personally read and address the community's feedback! <3”

Soul Saga is a uniquely challenging JRPG-rogue-lite hybrid with a strong focus on challenging and skill-based airship exploration, rewarding and strategic guild management, and a world that's literally destroyed over time.

Strategic Combat! Soul Saga's unique ATB combat system allows you to position your units in defensive or offense stances to optimize your chances at victory. In addition, every turn has a special buff or debuff granted to whomever acts. By accumulating action points by either delaying actions or taking certain actions, you can control the flow of battle with well calculated strategies!

Your own Airship! Free roaming airship exploration with complex physics gives you the power to explore every nook and cranny of this vast world to uncover all of Medonia's natural and historical wonders! And... WOAH! Watch out there, cap'n! Flying an airship takes real skill, and you can crash that baby right into the side of a big ol' sky island!

Choose your own difficulty! Choose from a variety of difficulty options that allow you to adjust every major aspect of the game. You can change everything from the shop prices, how fast you gain experience points, how much power or health enemies have, the crash damage on your airship, and more! 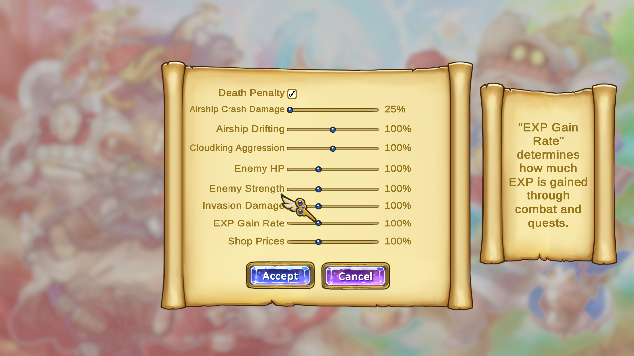