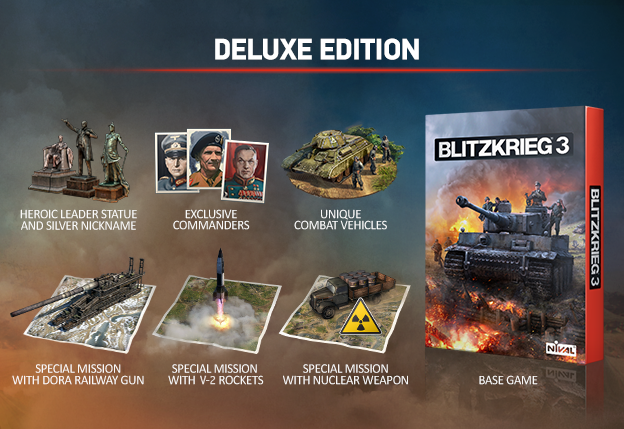 Blitzkrieg 3 is a WW2 RTS made for true admirers of strategic mastery!
Challenge your tactical skills in historical campaigns and defeat powerful Neural Network AI in competitive matches.

Choose your side in the largest war in the history and fight against Neural Network AI. Improve your tactical skills in the classic Skirmish mode 1x1, 2x2, 3x3, fighting with Boris.

Learn tactics from legendary strategists! Appoint Zhukov as the commander of your forces and defeat Manstein! In the game available more than 20 commanders, with unique features and combat tactics based on command styles of their historical prototypes. Complete tasks and earn the loyalty of different commanders. Each can give you useful bonuses and additional features on the battlefield. Rokossovsky, Rommel, Montgomery - the choice is yours! Each commander has his own specialization and favorite combat tactics that make tactics development of the game even more diverse, providing additional opportunities for interesting combinations.