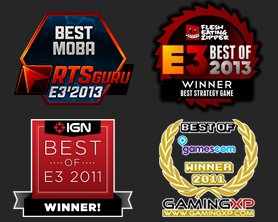 Notice: At the request of the publisher, Prime World is no longer available for sale on Steam.

Prime World is a free online game in RPG / MOBA genre with a unique universe where tactical session battles, castle management, and hero development are mixed together.

Prime World brings the MOBA genre to a new level:

improve your heroes not only on the battlefield but also in your own castle;

use these combinations in battles to defeat your enemies.
An incredible amount of talents and skins allows you to build up a one of a kind character depending on your preferences!

The game is based on the conflict of lords, who fight in the endless battle for control over prime - the most important resource, the possession of which can change the alignment of forces. Prime is magic and a source of technology, a dangerous alien substance, which can change the world and give power over it - everyone needs it. The one who controls the prime, controls the whole world!

Gather a collection of exclusive talents and create an army of invincible heroes. Attack the enemy towers and conquer new territories. Conclude profitable alliances with other clans or subordinate them in battle. Become the first in the world of Praya!

Every hero in the world of Praya can become one of a kind with the help of the talent system.

Prime World features an exclusive terramorphing system, which allows you to capture lands by raising your faction’s flag over it. Native terrain beneath hero’s feet makes him more powerful.

There are few combat modes in the game, which are a bit different from each other. Check the schedule of the modes being online in the special thread in our Community Hub!

Every hero has multiple individual skins, which are made limited timed to different special occasions. Choose a suitable look for your hero, it’s up to you, how it will look like! What is more, skins provide suitable voice-overs and can even change the hero’s gender.

Prime World combines tactical fights with strategic elements. You can become a powerful commander and a magnificent ruler of your castle at the same time!

The game is based on the conflict of lords leading constant battles for prime with the help of their Heroes - warriors with unique abilities who can return to battle after being defeated again and again.

Prime World offers its players a rich social system: players can join clans and develop them together, capture clans of other players.

There are numerous ways to upgrade your character in battle sessions, from farming creeps to playing mini-games on the base. This makes PvP part of the game even more diverse.