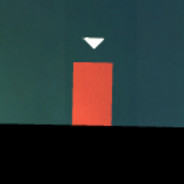 “I made this one. It's pretty good. Rectangles. Feelings. English voiceover.”

“For all its charm, Thomas is more than just the super-minimalist-yet-incredibly-engaging tales of a few plucky AIs. It's the story of games. Of how they get made and played, of the joys and frustrations they bring and of the thousands of tiny iterative processes that go into evolving single titles and the entire medium into their best forms.”
– Evan Narcisse, Kotaku

“It proves that you don't need tens of millions of dollars and hundreds of staff to make a game story worth telling, just a good hook, an engaging vision, and a whole lot of heart.”
9/10 – Josh Tolentino, Destructoid

“The understated aesthetic design and unusual co-op puzzles will absorb you for the game’s duration – the wit and personality of the writing, though, will stay with you for much longer.”
8/10 – http://www.ign.com/articles/2012/07/24/thomas-was-alone-review

Thomas Was Alone, and then, Well, he Wasn't.

Thomas Was Alone is an indie minimalist 2D platformer about friendship and jumping and floating and anti-gravity. Guide a group of rectangles through a series of obstacles, using their different skills together to get to the end of each environment.
Listen to awesome music by David Housden. Jump over rectangles meticulously placed by Mike Bithell. Listen to voiceover read wistfully and a bit amusingly by Danny Wallace.


Thomas Was Alone tells the story of the world's first sentient AIs, and how they worked together to, well, not escape: Escape is a strong word. 'Emerge' might be better. 'Emerge' has an air of importance about it, while keeping the myriad plot twists and superhero origin stories you'll discover under wraps. We didn't even mention the bouncing. That'd be overkill.

471 Curators have reviewed this product. Click here to see them.