“A game like Ooglians is best developed through iterations, with no strongly set plan what the game will end up becoming. We strongly believe the community is interested and wants to help shape Ooglians into the best game it can be.
We want to get the game out there as soon as possible to get that feedback, improve the game, fix bugs/exploits and overall share in the joy of Ooglians!”

“A minimum of 3 months, but no longer than 1 year. It's all based on feedback and reception of the game. We want to keep the scope small, so that we can move on to other games in the Ooglianverse before too long, but if the community clamors for more things, we are more likely to increase the scope!”

“We want to add a lot of stuff to the game, and stuff will be added along the road as we work.
Some of the stuff that is planned (but in no particular priority order) is:
”

“The current state is pretty bare bones - the core system is there, with all the basic elements required to make this a game.
Our two core features - base-building with a lot of cables and defend against the ooglian invasion - are in!”

“We think the price should roughly match the current state of the game, so the idea is that the price will increase over time. Expect the initial pricing to be about 50% of the full version!”

“We will have regular meetings to discuss the feedback we get for the game. The main channels for feedback will be Twitter and the Steam Discussion at first, but we ultimately want to have a Discord channel for feedback and communication with the community. 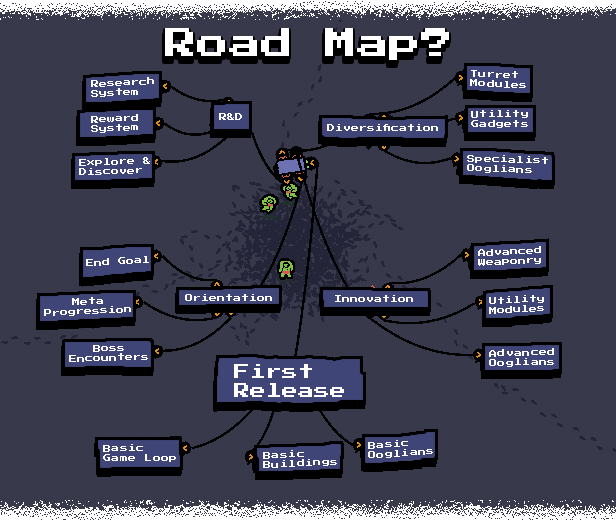 The tower defense base builder you never realized you wanted!
Straight out of a fever dream, here is... Ooglians!

Ooglians are a mysterious species.
It's unknown whether they are technophobes or destructophiles,
but they sure love smashing machinery to bits.

You are not an Ooglian.

You are... you. It's not up to me to tell you who you are.
Why are you on this planet?
What is your goal?
It is, as of now, unknown. Maybe if you protect your reactor, you'll find out.

Build the base around your reactor

Ooglians are attracted by the machinery

Ooglians try to destroy your base

Build more machines to defend your base

It's a game loop

You lose when if your reactor dies