“MISTROGUE is the first game title we launch. Thus, we think we should validate whether our game concepts are right one as early as possible. We relase MISTROGUE as early access game because we believe it is the best way to create a good game to receive constant feedback and collaborate with our players to improve it at early development stage even if the game is not yet perfect.”

“For about 6 months, but depending on player feedback and the amount of content we choose to put into the final game, it may vary.”

“We plan to add more content such as new equipment and skills as well as systematic feature such as trap system, dungeon map system, equipment reinforcement system. (This implementation plan may change.)”

“Core features necessary to play and contents important in realizing the game concepts are now being implemented in the game. More specifically, systems and features to explore dungeons, trade items using money, create skill builds, and battle with intellectual boss / enemies have been already implemented, which you can enjoy at Early Access Launch.”

“No definitive plans here yet, but it is likely that the price will be increased as official release gets closer.”

“We currently use our Discord server and the Steam forums as our primary ways to talk to our community. Players are welcome to suggest new features and modifications in the community, and we respond to these suggestions as much as we can. A closed test-group of players such as alpha testing group have access to the latest game featrure before the sale on testing purpose.”
Read more
This game is not yet available on Steam

MISTROGUE is a mid-tempo strategic roguelike action game that combines "traditional roguelike" and "skill building" gameplay concepts. Constantly changing dungeons will give you a unique "puzzle-like" experience; Your goal is to explore dungeons and in one attempt create the optimum build with the limited resources you find. There won't be a single build that'll make you complete the dungeons.Use your creativity to create powerful builds no one has found!

Your level and other stats are reset when you get out of the dungeons. Still, you can bring back money and items (weapons, shields, bracelets, medicine, spellbooks, reinforcement materials, etc.) obtained from enemies and bosses along the way.
You can enjoy the game cycle unique to the traditional roguelike, where you can strengthen your character with strong items, challenge even more difficult dungeons, and acquire even more powerful loots. 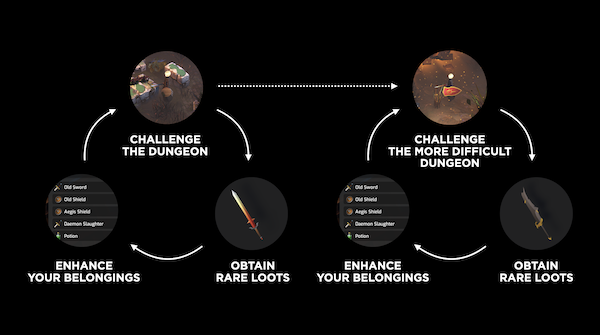 All equipment such as weapons, shields, and bracelets have unique active and passive skills. Equipping different weapons and shields gives you the endless combination of skills --- It might even give you the chance of "cheating the system" - some combos will enable you to deal insane one-shot damage, while another combo might allow you to use a successive burst of rapid damage against surrounding monsters.

Combat in MISTROGUE is a semi-real-time action where strategy and action coexist. You can enjoy highly strategic battles like changing equipment according to the situation, using special items, and strategically using various skills such as defence buff, attack buff, and strong attack.

Breathtaking decision-making in the dungeon

In the dungeon, you need to manage limited resources such as food and HP/MP recovery items. You may be forced to decide whether to escape from the dungeon and bring items back to the town or to challenge the boss to accomplish the dungeon.

Since the dungeon is procedurally generated, the structure of the dungeon changes form. The placement of monsters and items dropped on the floor will change randomly each time you explore. If you're lucky, a rare item suddenly drops to the floor.

Item drops with thousands of combinations

MISTROGUE leaves room for rare item drops, even to ordinary monsters in the dungeon. You won't be bored hunting the monsters just for EXPs, and there's always a chance you might get legendary weapons by slaying the weakest monster.

500 years ago, a kingdom was about to be destroyed by a calamity. Mages in the kingdom attempted to seal it in the maze and cast a forbidden spell on the maze to transform its shape in order not to unleash the calamity. The kingdom managed to survive the calamity but the forbidden spell gives life and awareness to the maze. Later, the influence of the magic reached the kingdom itself which left it ruined and changed it into the living dungeon.
500 years later, a young treasure hunter Mist, living in the Lootgar, has decided to battle to uncover the mystery of the kingdom.