Resonant Blade is a sci-fi action-adventure inspired by Hyper Light Drifter and Zelda where you explore, fight, solve puzzles and challenge powerful bosses in the futuristic world of Terra. The rogue artificial intelligence, the Dark Synths, threaten to destroy humanity. Harness the sonic power of the Resonant Blade to defeat this robotic menace and save humanity.

Resonant Blade is an action-adventure game with fast-paced combat. Dash, parry, and modulate the sonic energy of your weapon to exploit enemies’ weak points and defeat them. Harness the power of the Triads, powerful combinations of resonances that can bolster Atlas’s defenses and wreak destruction on his enemies. Scan your environment with the help of your trusty Synth sidekick, Otto, to solve puzzles and unlock new areas. Explore the vast sci-fi themed planet of Terra as you search for Sonic Crystals to upgrade the Resonant Blade. Visit Proto Labs and talk with Cid to get updates on the latest Dark Synth activity and construct weapon mods to give you the edge in battle. 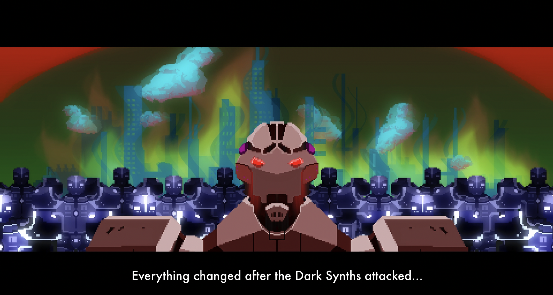 The planet of Terra is at peace and wealth is abundant. Over the decades of rampant industrial growth, the toxicity levels of the planet's atmosphere continue to rise exponentially as more and more hydrocarbons are burned to support the existence of the Terrans. The brightest minds of the Luminn Corporation gather to discuss the future of Terra. The Synths, an artificial intelligence, are created to steer civilization from collapse. The new AI devises and implements The Biodome Safety Project, encasing the world's cities in massive domes to protect its inhabitants. Within a short time, the uncertainty of the future seemed to vanish... until the Synths violated their ethical code embracing a new name, the Dark Synths, and revolted against the Terrans.

Follow the story of Atlas, an ex-scientist turned soldier, who takes up arms to fight after his family and hometown were destroyed by the Dark Synths. Since the AI War began, the Dark Synths have continually adapted to most of the conventional weaponry of the Terrans and are now nearly invincible to most of their attacks. However, a new weapon is ready to be put to the test. Ionian researchers and engineers have fabricated a new, state-of-the-art weapon, the Resonant Blade. The user of this sword is able to modulate its sonic energy in order to bypass the Dark Synths’ defenses. With the Dark Synths replicating and growing in power, the time to fight back is now. Find out why the Synths suddenly betrayed their creators and put a stop to the Dark Synth threat once and for all.