UNABLES™
Developer
9UNZ S.A.
Publisher
9UNZ S.A.
UNABLES™ is a physics based comedy game with innovative gameplay, where you control the environment. In a world spoiled by extreme laziness, its inhabitants seem to have their ‘do nothing’ skill maxed out. What will you do, since characters are so lazy, even the player is unable to control them?
All Reviews:
No user reviews
Release Date:
Developer:
9UNZ S.A.
Publisher:
9UNZ S.A.
Tags
Popular user-defined tags for this product:
Parody Physics Arcade Cartoony Casual Isometric 3D Cartoon Comedy Dark Humor Relaxing Puzzle Action Puzzle Platformer Hidden Object Top-Down Colorful Noir Stylized Satire
+
Reviews
All Reviews:
No user reviews 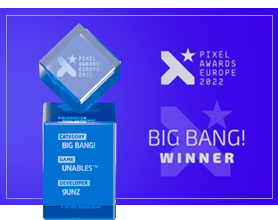 UNABLES™ is really something else.

It's an idea, a lifestyle, an anti-movement and a brand new comedy game with innovative, arcade gameplay. The cartoon world of UNABLES™ was spoiled by extreme laziness. What do you do when game characters are so lazy, that even you are unable to control them?

Sit back, relax your rear muscles and imagine a world where everyone just lies down and does nothing at all. Bullet-time all-the-time. One might argue that doing nothing is still doing something, but how did they all survive up to this point - nobody knows. How did they even evolve from a single-cell organism being this lazy?

Don't even ask what would have happened to them if we were not here to "help". Imagine cities not destroyed by giant monsters, no zombie outbreaks, no lucha libre prison fights... Needles to say, these unables are so lucky we're here.

Meet our diverse cast of characters: regular people, regular people in spacesuits, robots, kaijus, cats, vampires, zombies, dinosaurs, ghosts etc. all having this one little thing in common - they seem to have their "Do Nothing" skill maxed out. As far as we know, they are not going to help themselves out, so now you get to be the leg that kicks their lazy butts.

Playing UNABLES™ is also about ruining pretty dioramas. Hygge no more. And Ying always hated Yang. You cause havok by throwing stuff around like them evil babies throw their dirty diapers. Your goal is to literally push our heroes towards achieving their life goals. Use your joystick to flip 'em up - it's not like someone would stand up now and say you can't.

UNABLES™ will feature gameplay and design aspects you have never seen before, as well as some ideas you have probably seen a lot. Play 15 unique levels and reveal all the secrets!

* tools needed to push your eyes back into their sockets are not included.

Copyright © 2022 9UNZ S.A. All rights reserved.
UNABLES™ is an IP created by Artur Hilger & a game developed by 9UNZ S.A.