It is a simulation game where you command and fight a unit composed of land, sea, and air weapons such as tanks and fighters on a battlefield separated by hexes.
The key to the strategy is to "produce" weapons at the bases on the map according to the war situation, and give appropriate instructions such as "move", "attack", and "occupy".
Use your strategy to win! 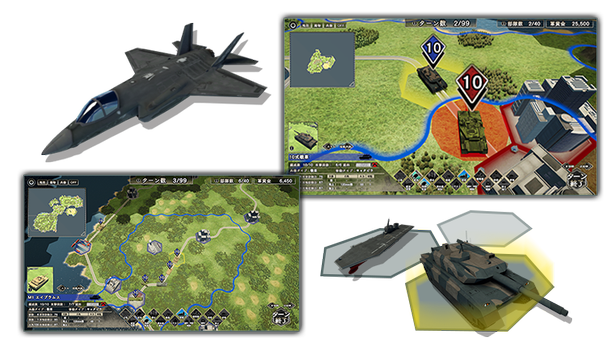 Daisenryaku SSB has a scenario mode with enemy and ally units on the map, and a free mode where you can change the settings of the map without the initial units!

■台湾危機
Battle between China and Taiwan.

■朝鮮半島の赤化統一
Battle between the Korean Reunification Army and the Peacekeeping Army.

■尖閣奪還
Battle between the Self-Defense Forces and the Chinese army.

■アイヌ独立
A three-way battle between Japan, China and Russia.

■米国内戦
Battle between the US regular army and the rebels.

You can play the same map as many times as you like by freely changing the settings such as military funds at the start of the map.
In the production type, you can edit the list of weapons produced by each camp.