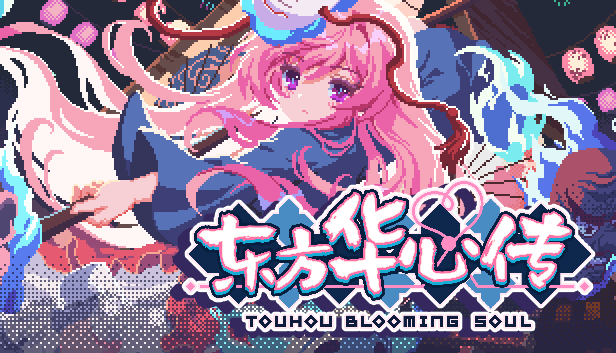 A fast-paced side-scrolling action game with roguelite elements. Follow Hata no Kokoro as she explores and defeats enemies on the stage of Gensokyo. The game provides many different gameplay options, players can play in a variety of different styles making each run uniquely different from the last.

This is a game about loneliness, self-discovery, and peering into others' intense emotions.

Kokoro is a mask tsukumogami with many bottled up emotions, but she cannot express them on her own face. All living creatures experience joy, sorrow, anger and happiness. At the advice of a friend, Kokoro reflects on her life's journey.
Relive the battles she once fought, her opponents' intense and passionate emotions, and take a peek into the mystery known as her "feelings"...

What are tsukumogami? —— tsukumogami are youkai born out of objects created or used by humans. Over many years, these objects gain sentience and gradually take on a human form.

Kokoro has four basic emotions: Joy, Anger, Sorrow, and Happiness, swap between them at any time during combat! Each emotion offers different attributes, abilties, and combat styles.
During exploration, players will also receive random items that boost basic attributes or emotions, making each choice a tactical decision that impacts how their character grows.
Create your own style, whether it's brute forcing, outmaneuvering, or gracefully avoiding enemies.

Players have plenty of opportunities to gain new items and skills while exploring each stage.
Items mostly strengthen your character, players can plan which skills to develop in advance or decide based on the items they get at the beginning. Multiple items of the same type will also form a more powerful set!
Skills can directly affect combat ability. Proper and extensive use of skills can change the tide of battle!
A roguelite based on these two elements, giving players a unique experience each time they explore.

Plenty of enemies and bosses!

Challenge 63 different regular enemies and more than 15 bosses!
Whether you're doing a normal run or a no-hit run, there's plenty of foes to overcome and many opportunities to explore!
We've carefully polished our spectacular boss battles not just for casual players who want to enjoy the game. Challenge runners, speedrunners and even hardcore players who want to experience breathtaking battles will also be able to enjoy them as well!

We'll be releasing a demo at Steam Next Fest on June 13, 2022. In the demo, you'll be able to experience a boss battle against Fujiwara no Mokou. In this battle, we've implemented three of Mokou's spell cards, one secret spell card as well as the basic abilities of Kokoro's four emotions. Since this is the first time we're making an action game, we hope to use the feedback from players to better polish the game and make improvements.

An early access version with the complete first chapter and 4 bosses is expected to release at around October. This will also come with plenty of items, 20 regular enemies, 5 elite enemies, as well as several platforming and running mechanics. The 4 bosses are based on the four emotions, including Mokou, who represents anger. Additionally, three new bosses representing joy, sorrow and happiness will be revealed. Naturally, our art and music will maintain the same level of quality, bringing you an experience that won't pale in comparison to our previous works.

The full game is expected to have 4 main chapters, which will be gradually released with updates in the future. Please look forward to our first demo on June 13!