“There are two primary reasons we see early access as a more substantial process compared to the typical:

(1) Early access in steam allows players to directly support the game development process, providing key insights to help tailor a unique and strong experience for the player. This symbiotic relationship between game developers and the player base keeps the project grounded to meet expectations and deliver a desired outcome.

(2) Early access also provides the opportunity to all players to participate in the alpha and beta builds of the game and contributing their support for the development of the project. All contributions will help development push the boundaries of possibility and achievement, allowing the project to blossom into something it may not see without the support of the players.”

“We intend for the game to be released as soon as the base content is completed; we anticipate this should be 6-12 months from release into early access. It is our goal and intent to release high quality content as fast as possible, to expand the experience for the player quickly.”

“Project Gunship in early access will provide the player with a small variety of scenarios and game modes to thoroughly test the game mechanics and flow of gameplay. Assuming there aren’t any major changes to these mechanics resulting from player testing, the primary difference between early access and a full version is content. We have plans on releasing several content packages that contain maps, assets, and scenarios from specific conflicts throughout the history of the AC-130. These would include conflicts in Vietnam, the Middle East, South America, and Eastern Europe.

We do have stretch goals to implement additional, more complex game modes that compliment gameplay in an AC-130, but these are highly dependent upon the support we receive in early access and thereafter.”

This should provide the player (in the initial early access release) at least 1-2 hours of game play.”

“Yes and no. The early access low price will remain the same into release but will only include the base game and content. Additional DLCs (featuring new content and conflicts) that are added later will be offered at a low cost as well but would need to be purchased in addition to the initial base game purchase. Our intent is to keep pricing low and modular, allowing more players to have reasonable access to the game, while giving them control over which content they continue to purchase.

Additionally, during the early access period players will be able to invest in a “supporters” addition, that will offer:

“This will mainly be handled through our discord server. We will be in direct contact with players, providing opportunities to give feedback and discuss game mechanics, scenarios, and features directly with the game developers.” 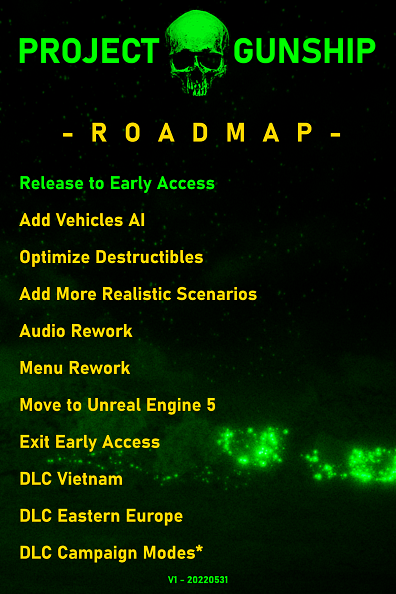 Everything is a work in progress, so features and the roadmap may change over time.

Enemy targets certainly can run, but they can't hide. Showcase the power of your weapons by tearing buildings apart, in our destructible environments.

Explore and utilize the different lethal weapons and munitions utilized on AC-130s throughout history.

With these weapons comes a variety of ammunition types that offer differing strengths and weakness. From high explosive incendiary rounds, armor-piercing rounds, to air burst high explosive rounds - you are responsible for deciding which to use to effectively destroy your target.

We believe dynamic AI is important to establish replay-ability. This means our AI is built to react circumstantially to what is going on around them and will therefore, have different reactions no matter how many times you play and replay a scenario.

No better way to showcase an AC-130's power by protecting friendly units from a zombie invasion!

Project Gunship is a single-player, AC-130 simulation game, showcasing AC-130 variants used throughout history. Be prepared to engage enemy infantry, vehicles, and destructible buildings with a variety of weapons and munitions.

Graphic violence and gore are a common occurrence in Project Gunship. Throwing high explosives at soft targets tends to dismember and since we were able to replicate the infrared camera view well, game footage often looks very realistic and comparable to real world combat footage.