Earth 2160
Developer
Reality Pump Studios
Publisher
Topware Interactive, ACE
After the destruction of the EARTH in 2150, the leaders of the Eurasian Dynasty escaped on board an evacuation fleet. Now they are fighting for the survival of the human species. Their base is one large building comprising of smaller variable parts.
All Reviews:
Mixed (633) - 69% of the 633 user reviews for this game are positive.
Release Date:
Developer:
Reality Pump Studios
Publisher:
Topware Interactive, ACE
Tags
Popular user-defined tags for this product:
Base Building Space RTS Real-Time Action RPG Strategy Post-apocalyptic Historical Action Simulation Pixel Graphics Sci-fi Atmospheric Aliens Futuristic Resource Management Co-op Multiplayer Singleplayer Tactical RPG
+
Reviews
All Reviews:
Mixed (69% of 633) All Time 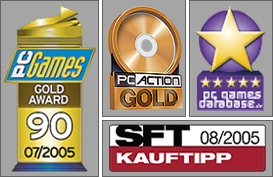