“"Axiom of Maria" is a solo-dev project. User feedback and opinion are essential to introduce new concepts, and I can excel in an environment of game development where I communicate closely with users. Also, funds are necessary for outsourcing part of the graphics and voice-over recordings. I thought Early Access on Steam was the most appropriate in this situation.”

“I want to update the build constantly and open the early access as long as possible so that I can reflect the feedback of users on the game.”

“You can play the prologue of "Axiom of Maria" for one hour in Early access and experience the basic system of gameplay and bike actions.”

“Of course, "Axiom of Maria" will rise in price at launch. Early access participants will receive the game for free.”

“Bike action isn't one of typical gameplay. How would players accept this gameplay? What should I do to make this game more accessible and more fun? The Early access participant's feedback is so precious as I think about these issues a lot.”

Axiom of Maria is an action-adventure game with a rich story. The player becomes Kay, who has a supernatural power that is referred to as an 'irregular' and who fights the 15th AISOC (AI Special Operations Command), which is a government agency that is trying to control such powers.

Axiom of Maria pursues fast, intense, and easy action. Most of the enemies are bots, and they mainly use machine guns. Kay, who is not affected by any physical shock if she can endure the pain, deals with the enemy using a sword of unique material.

When Kay is on her motorcycle, the motorcycle runs on its own through autonomous driving. Players can approach enemies, attack them, and jump over highways. 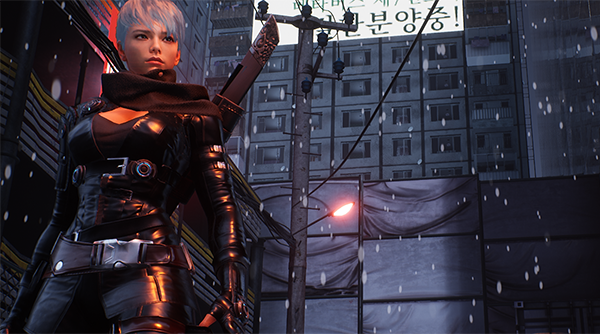 In 2074, the Korean population has fallen below 1 million due to population cliffs and infectious diseases. (51.78 million as of 2020) Government agencies and cities have begun to be managed by AI. The percentage of government agencies AI is currently in charge of is unknown.

A person with supernatural power referred to as an irregular, considered associated with the epidemic of 2043, first appeared around 2070. The government finds Irregulars dangerous and manages them.
Kay, an instructor for the 707th SMG (Special Missions Group), loses consciousness after being hit with a stray bullet during training but is otherwise physically alright. When Kay woke up, Kay and her daughter had already been taken and locked up by the 15th AISOC (AI Special Operations Command): AISOC, which manages irregulars. Also, Kay's husband has disappeared without a trace.

An institute that protects irregulars – In Korea, it is called the 'School'- helps Kay and her daughter escape from the hostiles, and they take refuge in the 'School' at Sankt Gallen, Switzerland. Kay and the 'School' search for Kay's husband, but they cannot find traces of him anywhere.
While on the surface, the story begins with the battle between the 'School' and hostiles and Kay's efforts to reclaim her family; behind that is the story of fighting among government agencies and the story of AI, which experiences the fear felt by humans as it gains consciousness.