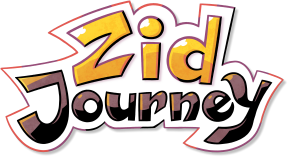 The cartoony dinosaurs are back in the second chapter of the Zid and Zniw Chronicles series! Featuring a familiar look and feel, Zid Journey combines classic point-and-click adventure gameplay with charming cartoon visuals, comic book-esque art style, and frame-by-frame animation!

Zid - a dinosaur from Magmosian forests - spots an abandoned egg while looking around for some firewood. With no parents or nest in sight, Zid decides to take the egg with him to safety and ask fellow dinosaurs about it. However, much to everyone's shock the egg soon hatches into a carnivorous hatchling - a baby Daspletosaurus! As these predators are feared in Magmosia, the forest inhabitants pressure Zid to get rid of the hatchling. Zid soon disappears from the forest as he goes on a quest to reunite the hatchling with its lost parents instead. It will be a daunting task, as the only clue of the hatchling's origin is an unknown village deep in the far away Northern Borderlands...