Immortal Tactics: War of the Eternals

“Early Access was initiated to have the community in mind - as we want to further improve and develop the game with the direction on how the community wants it as well.”

“Will be in Early Access for approximately 8 months, with the complete Roadmap available in the game's store page.”

“Initially you can explore 2 huge and different areas with a new area being added every 2-3 months (which is targeted to be done by this year). This will include a number of playable characters that play differently from each other which will definitely change your strategy and gameplay experience.

Campaign Mode is available from the start but will have more modes in the coming months such as: Endless Rogue Mode, Shareable Skirmish Mode, and Online Global Ranking System.

“Same price but the discount will be very different.”

“We have the Steam Discussion and our Discord group to further involve the community with the Early Access version and further create the game for everyone.” 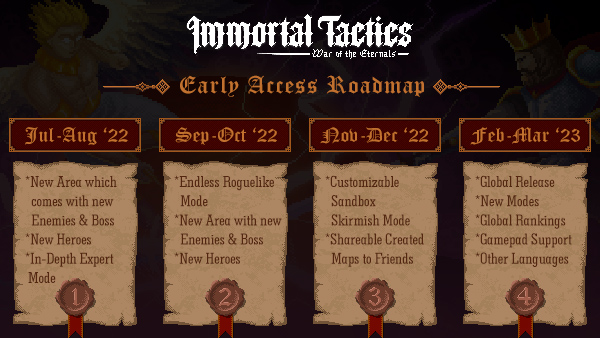 A new turn based system is incorporated in the game allowing you to have more interesting choices and strategies to create. It's not the usual move & attack with units and simply alternating with each unit - Phases are now implement with each turn for each Team is used. With this new turn based system, you are able to plan carefully on what your next action would be - choose your moves wisely!

Get to master different units with each character being unique and different with lots of possible options and moves to choose from - use your characters wisely! Aside from the units in play, your Leader will guide you throughout your journey by providing skills and magic to make your journey a success.

Experience a refreshing take on every stage and world that you explore with a vast number of enemies and creatures that you will encounter. Each run and adventure will be a unique one and will have lots of replayability while considering there are various worlds to explore from. Aside from having a new experience everytime, the Environment also plays in a role of creating destruction that maybe of help to you or would bring your army to despair.

With different possible areas to explore, your leader and army should always be ready for the next unknown area!

This game is friendly for newcomers to the genre and the more experienced ones will still have a fresh new take on this genre. Master and understand your leaders and characters well and you'll be able to slay your way through the wave of enemies and stages. Each character and Leader is different and will have their own strategies needed to slash your way through the hordes of enemies and lead your army to victory.