ABOUT THE DEMO
Kiss/OFF: AUDITION is a prologue to Kiss/OFF, a comedy visual novel set for release later in 2023. You play as Vic Powers, college track star and all-around charmer. Vic has a big day ahead of him — he plans to ask out *that special person* he’s had a crush on for the past few weeks. However, when he receives a threatening phone call from the mysterious ‘X,’ he’s given a challenge: If he CAN’T successfully ask out his crush, Vic will never see them again. With each failure (or success), reality resets and changes in unpredictable ways. What follows is an introduction to Steffi, Arturo, and Risq, the three main alien love interests of ‘Kiss/OFF,’ as well as the complete breakdown of reality as Vic knows it. 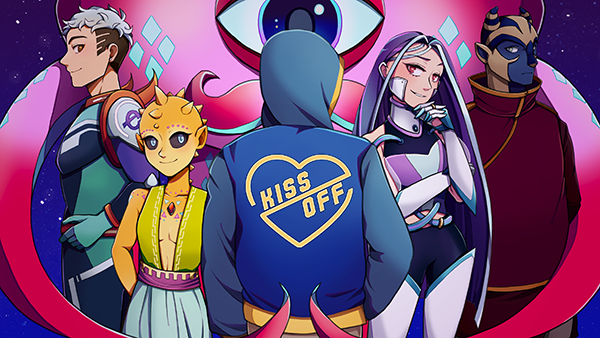 Xargazorg Intergalactic proudly presents Kiss/OFF, the hottest new dating show in the galaxy! Six Contestants have been Involuntarily Volunteered™ to pair off and SQUARE off in a supercharged dating royale. Whichever couple has the most passionate, *magical* kiss at the end of the three days wins the Ultimate Prize: They get to go back home to their families! The losing team gets the Ultimate Second Place Prize: Horrible, fiery death!

♥ MEET VIC ♥
Play as Vic Powers: college track star, chill dude, and pansexual king. When he gets abducted onto the set of Kiss/OFF, he suddenly has a lot more to worry about than declaring his major. Now, he’s got to kiss a hottie, win the dating game, and find some way back to Earth!

♥ DATE OR HATE?! ♥
Unlock over a dozen unique endings based on whether your Kiss/OFF partner LOVES or HATES Vic. Go for true, perfect romance, or try to drive your partner crazy—but always remember that actions can have big, big consequences.

♥ MEET HOT ALIEN SINGLES IN YOUR AREA ♥
Space Hero Kel, Robo-Risq, and Desert Wanderer Arturo are just a few of the contestants who couldn’t be more excited* to be featured stars on the galaxy’s sexiest gameshow! Match-up with everybody onboard and learn their secrets.
*Disclaimer: Excitement may vary.

♥ EVERYBODY GETS TO DATE! ♥
Whoever you DON'T pick as your partner will team up and compete against you. Get the chance to see how the other characters get along when you’re not in the room.

♥ ALWAYS ANOTHER EPISODE… ♥
Finish one episode, and immediately start binging another! THRILL as you discover that literally everything is different on the second playthrough! GASP as you slowly reveal more secrets of The Ship! GRUNT as you consider the possibility that Interstellar (2014) although a critical darling, was perhaps a bit overrated at the time of release!

♥ MYSTERIES AND TWIST…ERIES ♥
Unravel the riddle of The Ship, the alien audience, and your alien host with the alien most: Xargazorg. Every playthrough and every unique route gets you one step closer to escape…