“We choose to launch A Fishy RPG as Early Access because we plan to closely involve the community in the development of the game, adjusting not only details such as the design itself, for exemple, but also the core story and mechanisms of the game. We believe that, by leaving it in Early Access and stating from the beginning that this is not yet a final product (though fully playable), we will have a better chance of coming up with a better game/experience.”

“We plan to leave A Fishy RPG in Early Access until we finish the complete development of the game with the feedback of the community. The ideia is to leave the game in Early Access and gather these informations during 2022, and fully release it in early 2023. So it's approximately one year.”

“The overall goal of us is to improve the game's features without affecting its core idea too much. With that in mind, we're considering adding a crafting mechanism that could allow players to focus more on idling; to progressively expand the size of the procedurally generated map (which now is 1600x1600 pixels with a 192x160 resolution on the main surface, and 800x800 pixels in each of the four caves); and also adding a split-screen local co-op, since there's already four playable characters. However, those features will be greatly dependent on the feedback of the community, meaning that even though this is our main goal/scope, this might change depending on the experience players will have with A Fishy RPG.”

“At this moment, we have a fully playable game, with a dynamic fishing mechanism and a procedurally generated world (both on the surface and inside the caves), and three thousand different patterns of fish, also unique and procedurally generated. The fish's rarity are differentiated by its pattern number, and there are eight legendary fish (patters 1 to 8) that are storable. The game contains four playable characters to choose from and a fully funcionable mechanism of stats improvement, as well as four different fishing rods and guns that are obtainable during the gameplay.”

“We don't have plans to raise or lower the price of A Fishy RPG on its release. Even though we strongly believe that we will maintain the same price as in Early Access, the final decision will be made considering the envolvment of the community on the developing of the game during this phase, and also the amount of extra content that may be added.”

“The community will be involved through devlogs on the Steam store page, as well as in other forums, specially on GDevelop forum, which is the engine that's been use for the development of A Fishy RPG. Any feedback is very much appreciated!”
Read more

A Fishy RPG is a game focused on survival and exploration. It's also a fishing game, in the way that this is the main mechanism to gain experience, improve your stats and progress through the game. The main objective is to find the legendary fishes. In order to do so, you must improve your stats to be able to explore deeper caves and also improve your fishing rod to be able to catch rarer fish easier. Even though the game is built towards a specific story, it also offers the possibility of free exploration in a procedurally generated universe. 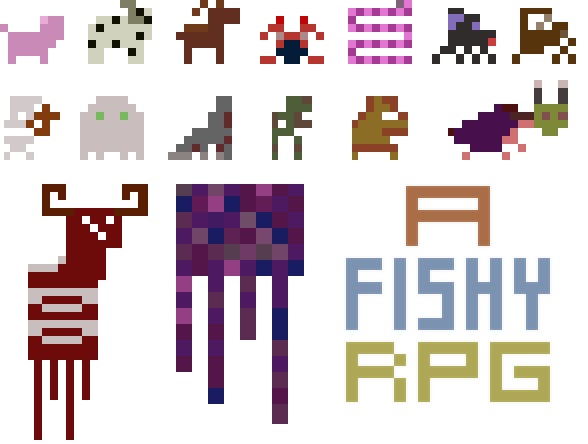 Features:
- Procedurally generated map and caves;
- 3.000 unique and procedurally generated fish to catch;
- Save and load the game at any point;
- Engaging fishing mechanism;
- Four playable characters;
- Stats to improve (power, defense and speed);
- Equipment to improve (fishing rod and gun);
- Wild life, besides the fish, to hunt (and be hunted!)...
- ...
- Eight legendary fish.

Regarding the caves/layers, fishing rod and legendary fish
You move from one layer to another (deeper caves) through portals. Be sure to upgrade your gun so you can break the rocks to access deeper levels. And, of course, be sure to upgrade your stats before going too deep :). Your fishing rod as well as your current layer/cave determine the range of fish you may catch. Now go catch some fishhhh.