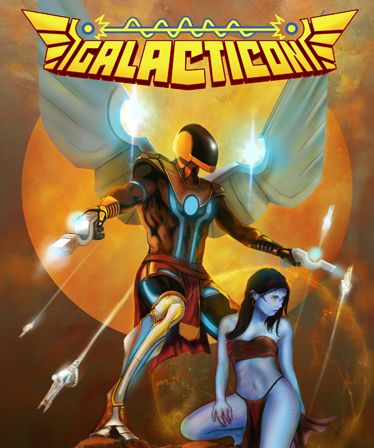 Galacticon is a video game with the look and feel of arcade cabinet games from the early 80'sin the style of Williams classics: "Defender" or "Joust", with the gameplay of legendary "Jetpac", and with touches of "puzzle" to increase bonus points and enter your score in the local high score table or even in worldwide high score table.
STORY:
Humans are tiny creatures of an outer belt planet that thanks to their biomechanical monstrosities have invaded, exploited ans enslaved most species in the galaxy.
The interestellar council has met for the first time in eons ans has determined that there is only one option left to exterminate this plague... an option that has always been feared beacuse it could be as powerful as dangerous:
Invoke the Galacticon, a deadly legendary creature -half God, half machine- and pray everything goes well...