Dear Mom: My Letter to You

Turning Over a New Leaf

​Dear Mom: My Letter to You is a dating sim that mixes a story-rich narrative with a calendar system, where you can choose your own adventure and develop relationships with other characters. The choices you make and the stats you gain heavily influence the game's story and progression.

Follow the story of Ayame Kawasaki, a spirited girl who closed herself off from everyone following a tragic incident involving her mother. One year later, she finally steps out to start her life again, repeating her second year at Yamada Hoshi High School. Embark on an emotional journey of loss, redemption, and the bonds that will blossom into meaningful connections. 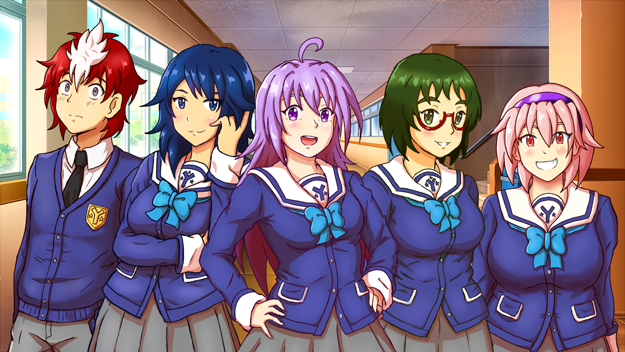 Ayame has a big heart and loves food and manga almost as much as she loves her friends and family. However, her quirky and spontaneous personality has always made her an easy target for bullies. Ayame's depression and anxiety take a turn for the worse following her mother's suicide. After taking a year off, Ayame is finally ready to confront reality— for better or worse.

Miamo is the confident, charismatic, and high-achieving Student Council President of Yamada Hoshi High. Her reputation as a model student has led her to develop an ego and demanding lifestyle that often strains her relationships. A certain incident resulted in her falling out with Ayame, who once saw her as a dependable older sister figure.

Perrine is Ayame and Miamo's childhood friend. She’s generally shy and reserved, but very energetic and lively around close friends. She believes in the goodness of others and can be too trusting of them. She finds herself in a new crowd after Ayame's year off from school, but Ayame still holds a special place in her heart.

Miso is Ayame's classmate and first friend after she returns to school. She’s a fun-loving, caring, and playful girl with zero tolerance for nonsense. She brings out the best in others and puts smiles on people's faces. Cooking is her life passion, and she loves sharing her food with others. She volunteers in her free time to help the poor.

Chip is Ayame's shy classmate who often isn't taken seriously by others. He's equally as sweet as he is awkward and is sensitive towards the feelings of others. There's just one problem— he's an absolute nervous wreck when it comes to girls. Luckily for him, an awkward encounter with Ayame may give him a chance to solve his "girl" problem.

Dear Mom: My Letter to You may contain content not appropriate for all ages, or may not be safe to view at work. This game is intended for a more mature audience (16+), as it contains sensitive topics like bullying, suicide, and blackmail.