Planned Release Date: To Be Announced

Dark and not so distant future. Scientific breakthrough led to usage of microbe colonies as power sources in all aspects of life. Corporations that control these living batteries development and production became very weightful political powers in the world. Crime, inequality and corruption under their influence reached levels unimaginable before. In attempt to take this chaos under control governments reorganized their police forces and boosted them with top notch military gear.

There is only one way to survive in this merciless world – join a group that possess enough power on at least local level. This can be a corporation, a government, or a gang. But either way, you and the ones you side with won't be able to rely just on guns and physical capabilities. All organized groups use various gadgets and global network to defend themselves and attack their rivals. Drones of different sizes and outfits often come to play when it's too risky to handle business in person.

You are Titanium Hound pilot and a kind of cop who wants to protect and serve, helping commoners who were unlucky to get in the middle of gang wars. Abominations, hacked drones and crazed gangsters are just the tip of the iceberg you are trying to break down without full understanding the scope of the problem. You are prepared much better than any regular police unit, but even so your hands are often tied, especially when it comes to questioning corporate regulations. 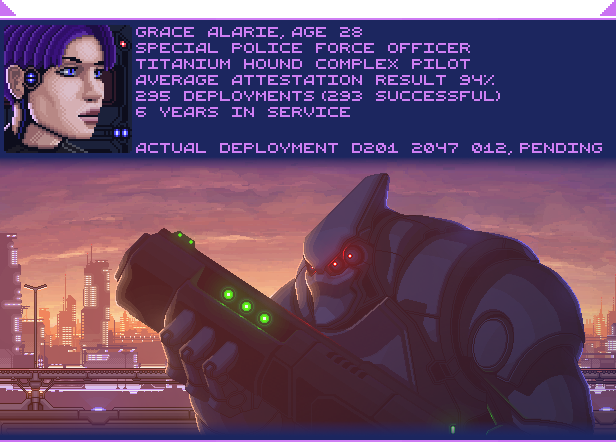 Titanium Hound is 2D retro-looking action platformer puzzle video game in cyberpunk genre, where you are going to pilot huge and agile exoskeleton to crush hordes of crazed security drones and abominations to uncover conspiracy carefully crafted by one of global corporations. The full list of game's key features includes:

Red Spot Sylphina is trademark and pseudonym of Sergey Kalmanovich, all rights reserved 2015-2021.

Titanium Hound is not using any fonts – all texts are hand-drawn.