“As my personal development of the game, I designed an innovative mode of play for this game. After a few months,many of the contents of the game were not delicate and rich enough. I hope that through the early access mode, I can collect more ideas and feedback from players as soon as possible,I can not do more testing about bugs or design defects by my single self,so I need player feedback,optimize and upgrade the game according to this, and polish the content and various details of the game, so as to finally present a good work full of fun, fluent enough and complete content.”

“In the full version, players should be able to experience a complete adventure story with ups and downs, while in the early access version, this story can only tell one third or even less.

I hope that players can have more than 200 sets of clothing to choose. These clothing should be more delicate, and add more attributes that can be associated with the play and combat, so that players can develop more rich combat strategies.

In the full version, more challenging enemies and smarter AI should be added, and the characters controlled by players should also have more fluent movements, better sense of attack and richer environment interaction.

In the full version, I expect players to get combat effects when they explode their clothes, just like Ultimate skill.

Finally, I hope that the full version can have more vivid sound effects and more kinds of background music.”

“The early access version tells only one third of the story.

In the early access version, the player controls the character action also appears a little stiff, the enemy type is not rich enough.

At present, the sound effect and music in the game are monotonous.”

“After the end of the early access, the price remains unchanged, but after the launch of the full version, I plan to give a lot of DLC to the players who buy the early access version to thank the support brought by the preemptive experience.”

“I plan to get more feedback and suggestions from the community. At the same time, I plan to recruit supporters in the community to participate in the production of clothing, music, plot and other content.”

This is a Indie game development by myself,I hope to bring you happiness.

This is the story of an asshole blade and a beautiful girl's adventure.

In the face of the extinction of the community, a blade coming from the earth landed in the hidden village of the princess and the clans. Only the person chosen by the blade could get close to it and pick it up, and it chose the our princess,just because her beauty, and on her slender figure.

This blade has a special hobby, that is, it must be sexy enough to stimulate it to produce excitement, and the more excited it is, the harder and sharper it is. Therefore, the princess have to change her clothes constantly under the request of the blade, so as to bring it a fresh feeling.

In this game, the appearance of clothes will have an impact on the attributes of the protagonist. When the princess wears different clothes, it means that she needs to use flexible fighting methods, such as sexy and violent cutting, flexible maneuvering, or wearing strong armor to resist damage. When you got different clothes, these fighting methods need to be flexibly selected.

Eight attack postures are matched with eight different weapon forms. Each form has its own unique gain effect.

There are many clothes for you to play and enjoy：

A variety of full particle hairstyles, each hair is rendered and fluttered independently:

Of course, this is not only a game that satisfies green horns, but when the princess walks out of the village, a wonderful and risky adventure begins. Her royal highness will break into the land occupied by the enemy with her blade and save the last clans.

Here are: refreshing fun of small battles, sneaky fun of assassination, and boss fight with challenges： 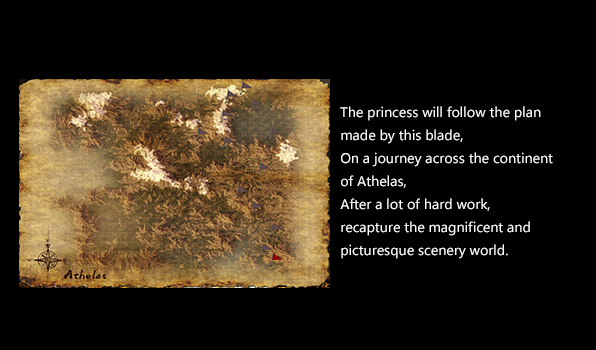 In this adventure, only the blade accompanied the princess. It spokes just like a lecherous scoundrel. But, is it the truth ?

At last, all my wish is you can feel happy when you play this game.