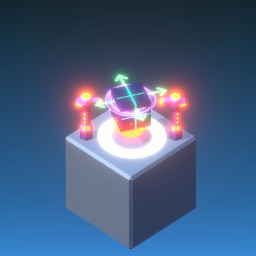 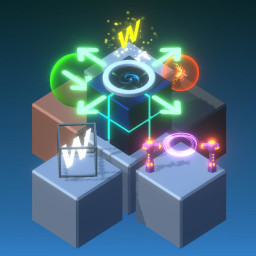 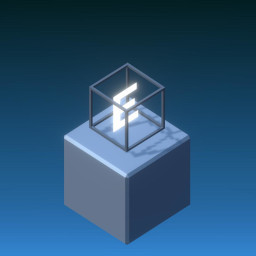 Added a new mode where you play through the arrows with the same logic of the game applies, but some of the instructions won't fit... so just ignore them

The Unique 3D Typing Platform Puzzle.
Move around the isometric platform to pass to the next level, but instead of using the regular arrow keys, you will have to use the whole keyboard. Solve the puzzle and regain the ability to move with the arrows.

As the main character (REALLY SPECIAL CUBE THAT CAN MOVE) you start the game with the ability to move around with using the arrows keys, but it will look pretty easy, you loses the arrows to move and you are forced to use the letters on the next cells to move around. To pass you must reach the portal that sends you to the next level. KCUL DOOG

The 3D Isometric platform puzzle game will challenge the player to move around by forcing him to use the keyboard letters to move, each cell on the platform will contain (or not) a letter, to move around the player will need to press the letter that is next to him. Some cells won’t contain a letter which will require the player to obtain the arrows to regain the ability to move on unlettered cells.
The game is progressed by short levels that the player needs to pass from the start point to the end point (unique portal).
The game contains an easier mode where the player play through the arrows only (for the hunt and peck people JK).

The game contains a Level editor where the player can create, edit, and play custom levels of his own, the levels created will be launched in the context menu,
The levels created can be sent to others by this manual: https://docs.google.com/document/d/1fOMcDxkp5ck0Q33XAglO4l2DedfaQsOvQs07w5fBdKs/edit?usp=sharing