Wishlist this new indie political strategy game in which the player creates and manages his political party! The story takes place in the 70's somewhere in a fictional eastern country. Manage your own political party on your way to control of the whole state.

"Here to Stay" has been in development for a year and a half and is currently in alpha. The game is the work of two indie developers and a small team of externists, and will include a main campaign, several scenarios and a sandbox freeplay mode.

Just as most strategy games focus on managing units on an actual battlefield, Here to Stay is a political strategy and management game focused on the battle on the political scene. It addresses how the economic situation, ideology of the population and the actions of individual political parties affect the situation within the state. The player has to deal with various types of elections and political campaigns. They must manage an entire political party as well as individual members. Prepare to be challenged on different political levels from hiring party members to managing the state economy. 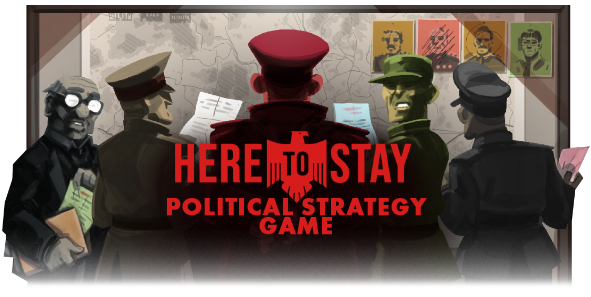 SOME GAME MECHANICS FROM THE GAME

Departments
Political party is formed by 4 departments: Internal affairs, Finance, Propaganda and Power. Make sure you balance them well and use full potential of their strength.

Documents
Leading the political fight means a lot of bureaucracy. You control the entire party and state with documents and contracts. Sign important documents and overview all important folders and mails.

Member actions
There is a lot to handle when it comes to party members. Make sure they are not unloyal and protect them from being killed or sent to prison.

Ideology
People in the state perceive the player's political party and its ideology according to the way the player handles individual situations.

Elections
Elections are one of the most important events in the state. It is necessary to prepare for the election campaign and choose strong candidates.

Economy
The political party with the largest representation in parliament is in charge of the state's economy.

Institutions
Banks, schools, prisons or media houses. These are important to control. Each of them gives you more actions you can do in the state.

Buildings
In each city, you will find different buildings with different benefits. However you need to appoint key members in the management of the buildings first.

State laws
The state laws determine the rules and the course of the entire state which everyone, including the player, must follow. Rules are not to be broken, however they are to be changed!

The player in the game has the option of sending other members of political parties to prison or having them murdered.