“As Garbage Crew! is divided into single levels with the first three being completely finished upon early access launch, the game will already provide some challenging evenings for you and your friends.
There are many more features, levels, game modes and an epic story planned but as I, apart from a little help here and there, am basically working on this project all by myself, early access would not only give me the ability to put all my time into the game but provide me with valuable community feedback to fine tune it and make the gameplay even more complex, fun and chaotic.”

“The full version of Garbage Crew! will come with tons of extra levels in new unique designs and with completely new challenges for you and your friends to complete, all accompanied by a crazy time travel story and tons of new powerups. I'm also working on some exciting bonus levels and a battle mode.”

“I plan to release the early access version with the first three levels (including level two, set in a medieval town) and the story part accompanying them. These levels will feature a unique style with additional mechanics and powerups.”

“I want to offer an advantage to the players that support the development of the game. Therefore, I will release the game with a discounted price that will be raised stepwise until the final release. Currently, I plan on raising the price two times, with the second time being when fully releasing the game.”

“As Garbage Crew! gameplay consists of many different challenges and mechanics, which the player needs to overcome and master to complete the level, there couldn't be enough crazy ideas for new features and powerups to add in order to stress the player even more. I would love to work with the community to find new, fresh features to add, that make the game even more challenging and absurd.
You can directly interact with me and the community through the games’ community page or through the Garbage Crew! Discord.”

Garbage Crew! is a game about chaos! You work in a team with up to four of your friends and an angry garbage truck driver. Your job is to empty garbage cans and containers. Sadly your contract doesn't state what kind of work you are required to do, so your manager loads you with all kinds of extra work including firefighting and forest work. Naturally you are completely understaffed and your short tempered driver has no intention of stopping the truck and wait for you just because you couldn't empty all the garbage cans while extinguishing a raging wildfire. Luckily there are heaps of powerups that help you with all these tasks, so your stress level won't reach dangerous heights. 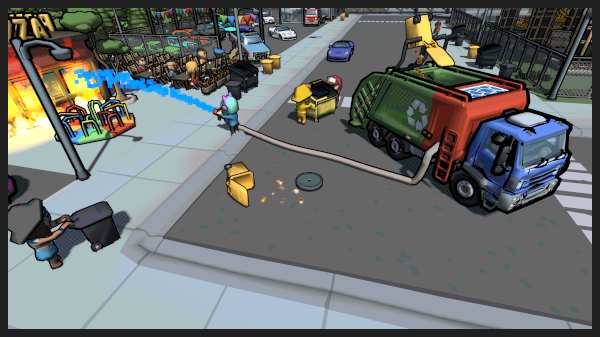 Garbage Crew! is a roguelike action game so to progress to the next level you not only have to make a fight plan on how to coordinate your operation but also unlock and buy powerups that make your life much easier. To unlock the next level you need to complete all three incentives and finish the level in time. If you've made it in time and cleared at least one incentive you unlock a new powerup that will help you advance on your next run! While in game all kinds of unexpected events occur so make sure you come prepared to adapt to all circumstances! After all, you are doing like 10 jobs at the same time!

Return to your timeline

Powerups are nice and helpful, but with great power comes great responsibility. One promising contraption that the crazy professor living behind the dump came up with should have enabled you to slow down time. Sadly but expected things don't work out according to plan and the powerup teleports you back in time! Despite there being a lot of garbage to take care of in the past too, you obviously want your old life back which leads you to a chaotic journey through time!

Although you can play Garbage Crew! on your own, the game is most fun when you team up with your friends! Therefore, Garbage Crew! supports local multiplayer with up to four players. Don't worry you can also play with your friends that don't live near you thanks to Steam Remote Play Together which requires just one of you to own the game!

Garbage Crew! Will be released in 2022 as Early Access starting with three brand-new levels in completely new eras!