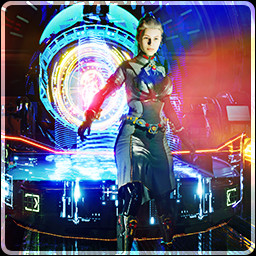 “Early Access allows me to build Höll Space as an episodic game where each episode features one character's story in the same universe. You can play the separate episodes as they get developed as standalone stories and the final version once all are ready where all of them are interconnected. Some episodes are prequels and sequels to others, allowing for the same game session character and progress to be transferred between some of them. The new episodes reveal more aspects of the game and new perspectives into the universe of Höll Space. You can experience and support the game and its universe during its creation.”

“The first story arc features six episodes. The game will stay in early access until those episodes wrap up and conclude in the first season's final. The first episode is good to go. Each subsequent episode will take between 2 and 4 months to build, putting the Early Access conclusion duration at about 15 months.”

“The full version of the game will feature all episodes of the first season, which can have some interconnected plot points and events that conclude with different outcomes depending on which of the characters the player chooses to employ in the finale.”

“The first episode is fully playable in a work-in-progress stage, featuring most core game mechanics and the RPG System.”

“The price of the game will increase every time an episode gets completed until the game reaches its full price, with all episodes of the season in their final state.”

“One developer creates, for now, the entirety of Höll Space. The Community is welcome to help with testing and reporting bugs and problems. The stories told, the gameplay universe, the content of the episodes, and the narrative is already established and planned. Feedback and suggestions regarding improvement of gameplay systems can take Community suggestions into account to improve the experience. However, Höll Space is not meant to be simple to beat, players who expect tutorials or an easy mode will not find such a thing in this game.

Depending on the success of the game, there could be potential support for modding added after the completion of the first season to enable the Community to modify the current game and even add new episodes.”

Each episode puts you in control of a different protagonist in an open, nonlinear maze and world who has to figure out the secrets of Höll Space to survive.
The game emphasizes building the world by letting you play it without taking you by the hand and guiding you through it. The experience and progression in the game are all up to your play style and exploration abilities. There's always more than one way to get ahead. But be warned, the game will reward you for exploring, but you might find yourself ill-equipped to face head-on what you encounter. Some parts of the world may change according to your earlier actions in the game, even in an unexpected way.
The RPG mechanics of Höll Space 5D6 influence your character's physical movements and the use of tools and weapons, which might, in turn, unlock new ways to traverse the world.

Immortality is an excellent concept unless …

The game is in a horror setting. It has cyber zombies and demons in it. In some cases, the depicted figures look like humans, and the degree of clothing Vareys up to nudity in a non-sexual context. The enemies in the game get disposed of by violent means involving a multitude of weapons and bloody gore effects.

This game is a work of fiction and an expression of art. You, as a customer, accept that this game is designed for entertainment purposes. 5D6 Games holds the intellectual property of Höll Space and the 5D6 fading star empires setting. The scenes depicted in the game are not indicative or related to the developer and publisher's real-world views and statements. Unreal Engine, the circle-U logo, and the Powered by Unreal Engine logo are trademarks or registered trademarks of Epic Games, Inc. in the United States and elsewhere. All other names, trademarks, and logos are the property of their respective owners.