“As we work towards the full release of the game, we want to gather player input to make the end product more enjoyable for our players. We believe that the most important thing in making a game is incorporating honest player feedback, which is why we’ve decided on an Early Access release.

We want Project MIKHAIL to be the best game possible, and to do that, we need everyone’s feedback.
We hope you’ll work with us to make this game the most fun it can possibly be!”

We’ll keep updating the game to incorporate your feedback, and then when we’re ready, we’ll move to a full release.
We’ll be sharing our development roadmap on Discord and Twitter so that everyone can see where we’re at and what we’re planning.
We’ll also be giving regular updates on our progress, and in these updates we’ll talk about when we’re ready to move the game into full release.”

“The ultimate game product will be identical, regardless of whether you purchase the game in its Early Access or Final state.

The Early Access version represents the game as it currently exists in its under-development state, with improvements and changes being constantly made.
Updates will mainly involve improving the battle system to make it more interesting and fun for players, and providing a more speedy, clean and visceral combat experience.

We’ll also be working to improve the Versus Mode and Frontier Mode, as well as eventually add a Battle Pass.

The Versus Mode, where you fight players from around the world in Tactical Surface Fighter combat, will be getting a voice chat function and a friend match function, as well as a major update to make team TSF combat even more fun.

The game’s Frontier Mode, where the global game world changes based on the aggregate choices of each player, will be getting additional features and a UI overhaul, as well as other improvements in response to player feedback.

The Battle Pass will include many different items, including items to customize the look of your Tactical Surface Fighter.”

“The game’s Story Mode, which allows you to enjoy the world of the Muv-Luv Alternative Anime (Airing Now!) has all the elements needed to enjoy it as a full release. (*We might make some adjustments to it, though!)
“Frontier Mode” and “PvP Mode” are in beta, and lacking some features, but playable.”

“The game price itself will not change.
However, as a thank-you for helping with the game’s development, Early Access buyers will be given paid DLC items from the final release for free when they begin playing the Early Access version. (That is, items that will cost money after the full release, Early Access will receive early and for free.)”

“We’ll be giving users opportunities for feedback on Discord and Twitter, as well as regular video updates from the dev team. We’ll also being constantly sharing the state of the development process and what content we’re adding to the game.

We’ll be waiting for your feedback to make Project MIKHAIL a more entertaining game!
Find us on our official channels, and share with us your thoughts and feelings about Project MIKHAIL.” 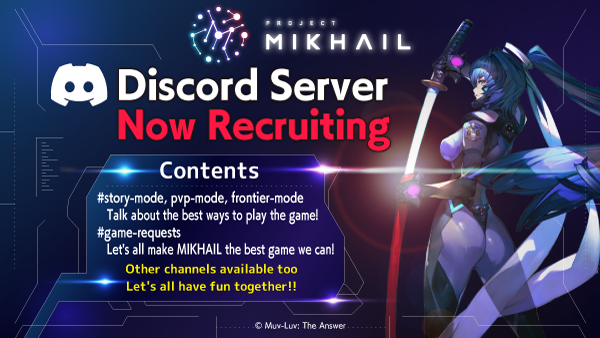 -It’s Your Responsibility to Change the World-

Set on an Earth where mankind is being steadily annihilated by the alien invaders known as the BETA. Over the course of decades, humanity has come to rely on humanoid weapons called Tactical Surface Fighters in their attempts to resist the alien onslaught.
What choices will YOU make in a world that’s heading towards destruction?
Your actions will change the course of history for the whole world...

Project MIKHAIL is a mecha action game with three different modes of play:
1. A Story Mode with a full story for players to enjoy.
2. Frontier Mode, an online mode where all users inhabit a shared world, and each player’s actions have an influence on the story's outcome.
3. A PvP mode where players fight each other in their Tactical Surface Fighters.

In Story Mode, the player takes the role of Shirogane Takeru, the hero of Muv-Luv Alternative.

Throughout the story, the player will be asked to make choices.
How the story ultimately ends depends on the choices the player makes.
In Story Mode, the player not only makes their own story, they also get to construct their own personal Tactical Surface Fighter mecha.
By defeating the BETA and putting together the parts they drop, they’ll get to make their own ultimate fighting machine.

An online mode where all players inhabit a world where they're tasked with fighting the BETA invasion of Japan and saving the world.
Every player’s actions will have an effect on the balance of power between various factions and individuals, each with their own designs and plans for the future of Earth. Everything they do will change the state of the war.
Think YOU know what we have to do to save the world? Come up with your own plans, or work with other players to learn secrets you could never find on your own, revealing these factions’ deepest secrets and saving the world from destruction. 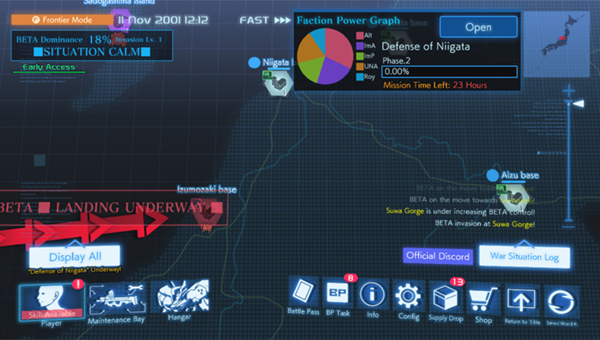 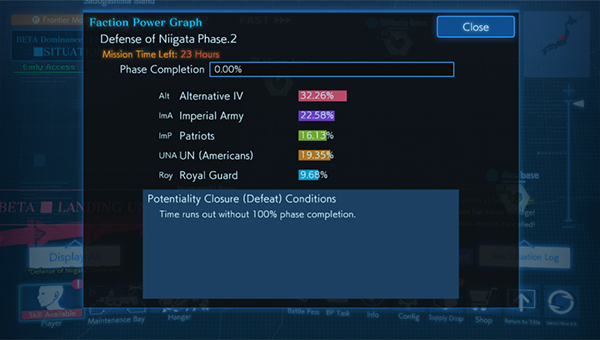 A player vs player combat mode.
Players join two teams of 4 TSF pilots and battle one another.

The Early Access version of PvP is still in beta,
but in the future we’ll be adding:
・More TSFs to fight in.
・Voice chat
・Balance changes and roles to make team play more fun.