The game recreates the Taïping Rebellion of 1851-1864. it was one of the deadliest and most horrific civil war in China, costing the lives of millions. Play the Taïping rebels and their allies, fighting to create their own state, or be the Qing Emperor and crush the revolt and its foreign devils allies before it topples your dynasty.

Between 1851 and 1864, China was engulfed in its most horrific – and deadly – civil war, the Taïping Rebellion, that cost the lives of millions of Chinese. In this game, you will play the rebellious troops of the ‘Heavenly Kingdom’ (a.k.a. the Taïping) and their other allies like the Nien bandits, against the Qing dynasty. Other rebellions and Foreign powers intervention will play a nuisance role on both sides.

Scenario durations last from 8 turns (for the smaller ones) to over 164 turns (the 13 years grand campaign), each representing a period of one month between April 1851 and December 1864.

One player represents the Taïpings rebels and its allies, the other the Qing Empire various forces. Both have land and naval units under their command and can play some diplomatic game with foreign powers.


Be careful, on both sides, of the Foreign devils (French and British forces), as they are for now neutral, but may well be, at some point, become a fearless foe or an opportunistic ally as they will attack the Empire or turn against the Taïpings. Diplomacy will them will play a crucial role. 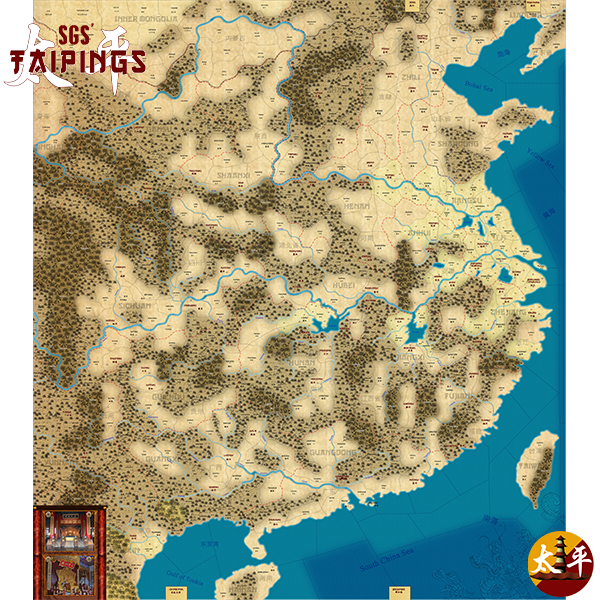 The map covers most of China, and some nearby areas, divided in regions and provinces. Terrains include ricefields, clear land, hills, mountains and highlands, desert and major rivers, as well as coastal or oceanic waters. There are hundreds of minor or major cities spread over the playable part of the map, as well as a special display where diplomacy is handled. The game’s time scale is one turn for each month of real time.

Weather and climate will play a large role in the game, as winter, floods, rains and drought are modelled through a visual change in the map features. 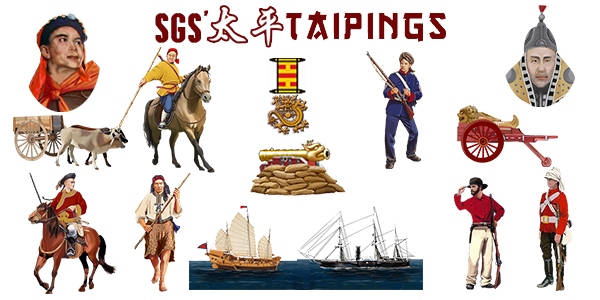 The players on each side will have access to dozens of different units types (regimental size), such as levies, militias, Chinese or Manchu Banners, cavalry, bandits, triads, Foreign infantry or sailors, old cannons, modern artillery, transport junks and warships, as well as many other types of garrison or supply units. All those troops and ships will cost precious income to build, and some will require training to evolve into more efficient models.

In this game, thanks to the new economic system added to the SGS engine, you will also receive income from key cities and regions, with which you can maintain and expand your armies and fleets. Major income sources will come from the cities and ports you control, as well as the rich agricultural lands. But you will need to be wary of corruption, imperial spending and other sources of waste of your precious resources.

The game's event and cards, more than 200 of them, allow full replayability thanks to the numerous various situations that they create on the diplomatic, military, political or economical fields.


Estimated Playtime: from 1h00 to many hours...
Favored Side: None.
Hardest to Play: Qings.