As the infamous Mindcop, you can dive into the minds of your suspects to
uncover their secrets and unravel their lies.

Time in the game doesn‘t go by in real-time. Instead, every action comes with a time
cost and you will have to set priorities while figuring out where you want to spend your time.

Looking at every little thing in a room, or showing a suspect every single item you picked up,
is probably not a good idea. You will be forced to make tough decisions on what is
really worth your time and what will just lead you to another dead end.

Can you catch the killer in 5 days?

"Mindsurf" is what it is called, when the Mindcop attempts to sneak into the mind of one
of the suspects. This plays out as a real-time puzzle game.

Some minds will be harder to surf and you can level up your Mindbullets
to make things easier for yourself.

Complete a Mindsurf to explore the "Sea of Thoughts" in that person‘s head.
Here you can find clues and topics to use in a conversation with your suspects.

There are no language options. English only!

TEXT
Text size or font type can‘t be changed in any way.
The size or appearance of the User Interface can‘t be changed.
Example of actual 1:1 text size when playing in fullscreen at a 1920x1080 Resolution: 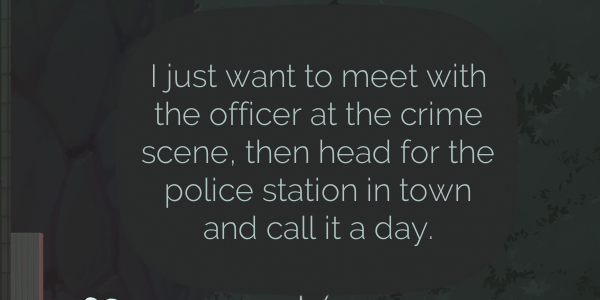 There is no Text-to-Speech option.
Keep in mind that reading is a big part of this game.

COLOR
The game frequently features a Mini Game that asks you to distinguish between
4 colors (red, cyan, purple and yellow). The Mini Game uses up to 3 of these
colors at a time. Examples:

This is not possible in the Demo, but the full game will have an option to turn the Mini Game
off entirely. The Options Menu provides a Color Blind Mode. This Mode adds Symbols
to the Mini Game. Example:

CONTROLS
The game can be played with only the Mouse (Mousewheel or Middle Mouse Button
are not used). You can also use Mouse+Keyboard if you prefer walking around with
the Arrow Keys.
The game can also be played with Gamepads. Most Gamepads are supported.
Most Buttons of the Gamepad are used with the exception of the D-Pad and the
Analog Stick-Buttons (Where you have to press into the Control Stick).
The Shoulder Buttons (Triggers) are only used in the Mini Game.
You don‘t have to use them and can instead use the Bumpers or Face Buttons.
There is no option for any kind of Button Remapping.
The only times the game asks you to do anything under time pressure is during the
Mini Game. This is not possible in the Demo, but the full game will have an option to
turn the Mini Game off entirely.

AUDIO
Every spoken dialog comes with subtitles.
Sound is not necessary to complete the game. There will sometimes (not often)
be optional things (hints, storytelling) players can pick up on in music and sound effects.

Anything missing in this list? Please tell me! (mindcopgames@gmail.com)