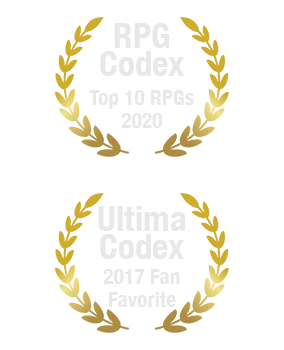 “Leaping into the game last week, I was impressed with how faithfully it reproduces an early 80s video game experience in both presentation and interface...It stands out as an extremely impressive creation, faithful and fascinating...”
Vice

“I played the game the whole weekend, it’s awesome! The game swept me off my feet. It is really, really terrific!”
Jörg Langer im Spieleveteranen Podcast

An 8-bit RPG modeled after the iconic games of the 1980s. You control a party of adventurers who travel the Realm, talk to NPCs in towns and castles, explore dungeons, and fight monsters as you seek to save the world from a terrible danger.

Included with the Game

Mild references to drinking; infrequent coarse language (can be disabled with a password-protected setting).