This content requires the base application iVRy Driver for SteamVR on Steam in order to run.

This content requires the base application iVRy Driver for SteamVR on Steam in order to run.

When using the Oculus App Lab version of the iVRy app, the "Premium" version MUST be purchased from the Oculus Store.

In order to use the iVRy Driver for SteamVR for Samsung GearVR or Oculus Go/Quest/Quest 2 headsets, you will need to install the iVRy GearVR/Oculus app from:

To use the iVRy Driver for SteamVR, you MUST first install SteamVR from the Steam Store:

To start the app on GearVR, tap the icon in the Android launch screen and insert the device into the GearVR headset when prompted. Device must be mounted in GearVR before starting SteamVR.

To start the app on Oculus Go/Quest/Quest 2, use the link in the "Unknown Sources" section of the "Apps" menu.

On startup the app will display "Waiting for Connection", while it waits for the iVRy Driver for SteamVR to connect. SteamVR can be launched from the iVRy "Launch" button, or by launching SteamVR or a SteamVR/OpenVR VR title.

When using the iVRy Driver for SteamVR for the first time, it MUST be started from the "Launch" button, to ensure any additional services and drivers it requires get installed.

When using the GearVR or Oculus Go version of the iVRy app, with a GearVR/Oculus Go controller, the following button mappings will be used: 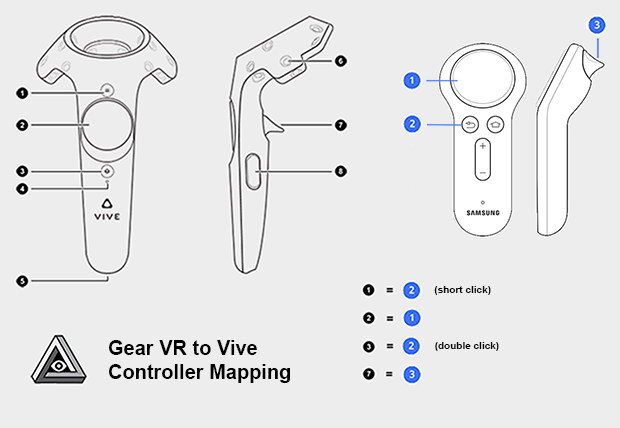 What is the iVRy Driver for SteamVR (GearVR/Oculus Premium Edition) DLC?

• It is the FULL version of the iVRy Driver for SteamVR with Samsung GearVR and Oculus Go/Quest/Quest 2 support.

What is iVRy (GearVR/Oculus Edition)?

• iVRy is an app for your Samsung GearVR or Oculus Go/Quest/Quest 2 headset with a Virtual Reality headset driver for SteamVR.

What does that mean?