“So far this has been a one-person project for about two years, and I'm still looking to find out what players will make of this dueling system. I have my own idea of how to build on it in future, but first I need to learn what other people think needs changing or improving.

I also just want to start funding better visuals. My own modelling skills are limited, but now that the game is playable and all the basic features are in place, there's more room for me to just focus on improving those features. Then I can hopefully onboard better 3D art talent to touch up the models I've done so far, continue work on the Shibuya map, and expand 'Central' (the main map) to include more of Hong Kong.”

“More playable characters, more abilities to use in the boss duels, and a better sense of unique advantage to each combat ability. If all other aspects of development are proceeding without issue, I would also like to start working on a multiplayer feature.”

“The map called 'Central' is playable and should have a decent level of replayability, as enemy formations and spawn locations are both randomised.”

“It'll be the same price throughout and after early access.”

“More than anything to see how this dueling system debuts. I'll be looking over the Steam boards for any way in which players wish it were different or what they would like to see added to it. Of course, I'm also interested to hear if there are any lulls or awkward moments with the rest of the gameplay, and any bugs that need fixing. Other than that, I'll be keeping an eye out for any expressions of interest in a multiplayer feature, since I'm also interested in doing that.”

Close-combat boss battles are won by attacking the enemy's vulnerable side or defending from the side of their attack. The player will either be in the offensive or defensive mode of the duel, but the tables can always be turned depending on their performance. Duels become faster at higher difficulties.

Regular enemies will attack in waves. Players can take out several enemies in a single swing, but they will also have to stay on their feet to avoid a relentless barrage of attacks. Dodge rolls and special attacks can make all the difference in these battles.

Enemies can spawn on the rooftops of certain buildings, the streets beneath them, or any floor in-between. Players will need to track them down by running up walls, jumping onto balconies, or even just using the elevator.

Below is a map of the level 'Central' with each spawn area marked. Within each area, there are multiple possible spawn points. Other parts of the map can still be explored for pickups. 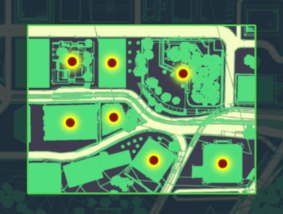