“Cosmo Clash is a work in progress. It's currently got 50+ stages - our goal is to launch with 100! Got ideas for stages, gamemodes or powerups? Let us know! We are still toying with the core mechanics of the game & solidifying the visuals, which gives us time to go bonkers with the game's design!”

“Up till official release, we'll be adding stages on a regular basis while also working on other key features. We want more customization & modes of play. During Steam Next Fest, we discovered that the game is at it's best when players decide the rules - and so we want to add plenty of customization before we hit that launch button!

Online multiplayer is currently supported through Steam Remote Play, but we are considering alternatives as we go along.

We want to add more localizations & gamepad schemes to the game - let us know if you want the game in your language!”

“Cosmo Clash is fully playable - supporting up to 4 players & offering a ton of different stages to duke it out on.”

“During Early Access, the game is HALF OFF! We expect to double the price of the game as soon as we hit official launch. Don't worry, we'll give a headsup on the official release date at least one month in advance.”

“We are actively listening & sharing development news, videofootage & development tips with our community - here on Steam, our PUNY Discord & Twitter channel. Give us a follow & shout your ideas at us!”

Cosmo Clash is an homage to the classics of the arcade - reborn as a multiplayer shooter! Blast, dodge & lay traps for your friends as you battle across the galaxy!

Is there a single player mode?
Well, sort of - you can play against bots. Enter bots into the duel by pressing the 1, 2, 3 or the 4-key on your keyboard. We recommend playing against other players.

How about online multiplayer?
While the game does not have any online features at the moment - it does work splendidly with Steam Remote Play Together or Parsec!

Does the game require gamepads to play?
No. While we do recommend plugging in your gamepads, you can use the keyboard to play with multiple players. Player 1 can move with Arrowkeys, shoot with Period-key & dash with Comma-key. Additional keyboard controls are as follows:

What more is there to this game?
We are currently working on adding more stages, powerups & modes to the game! Feel free to jump on over to our Discord and pummel us with suggestions. We'll be hanging out on Twitter too! 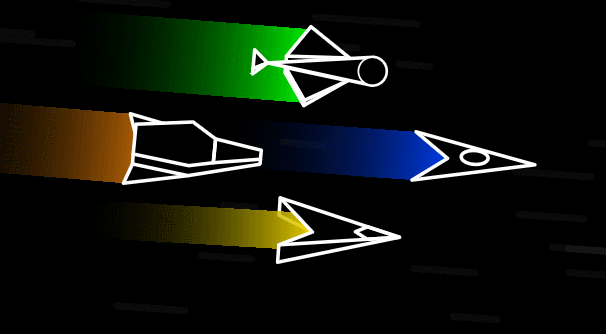