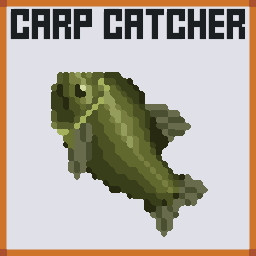 “The Fishery is in early access as I'd like to include the players / community in developing the game and allow them to provide feedback which I can respond to instantly!”

“The Fishery will approximately be in early access for around (with everything going to plan and no major issues along the way) 4-8 months.”

“The full version of The Fishery is planned to differ from the early access version by having an improved and increased amount of features, such as (and not promised nor limited to):

- A vast amount of places / lakes to travel and fish
- A lot more species of fish
- Improved character and item customisation
- Different ways of fishing (e.g feeder)
- A comprehensive depth system
- Use ways of travelling on the water such as a kayak, boat and whatnot”

“Please refer to the main information of The Fishery for a full list of current features and functions.”

“The price will change once The Fishery has left early access; the reason it is priced at what it is currently, is as a thank you to those who would like to support the development of The Fishery and provide valuable feedback!

“I plan to involve the community in all aspect of development - whether it be what fish should be added next or the next lake to be added!

I will be in constant contact with the community and plan to do so throughout all of The Fishery's development stages. This will be through Discord or on The Fishery's Steam community forum.”

The Fishery is a 2D sandboxed fishing simulator. Choose your bait and spend your days by the lakeside, sell the fish you catch or release them - it's your choice! Earn experience and money, level up, unlock and purchase more baits and equipment and catch even more! Good things come to those who bait!

A fully functional fishing system. Including casting and unique fish bait preferences.
A brand new real-time fish fighting system!
Over 15 species of fish (and A LOT more to come!). Within each species you are able to catch (or try to catch) 4 different rarities - common, uncommon, rare and specimen.
- Each catch will vary in weight and rarity - from an common 4lb carp to a specimen 60lb!
- The current available lake is "hand-made" and is based off my local fishing lake.
- Bait system with currently 6 baits available - each with their own advantages when trying to catch a certain species!
- Unique achievements to hunt and collect - along with hidden achievements!
- A unique "order" system; similar to challenges - complete orders to earn experience, money and rare items!
- Experience & levelling system
- Wildlife around and on the lakes
- A functioning depth system; catch different species in shallow parts of the lake and deeper parts of the lake

Please remember this game is in early alpha and is in active development; more complex functions and features are planned!