“We are a small development team and have been developing this project for 12 months. It's time to receive the truely suggestion and ideas from players, and Early Access is a great way to help us to achieve the goal.”

“We plan to take 6-12 months to exit Early Access. However, the situation will be based on the progress of the development.”

“The official version will contain the contents listed below additionally：
◎ Over 10 models of German Tanks can be controlled.
◎ Over 25 vehicles and artillery will appears in the game.
◎ Include the stages in Early Access, It will have 12 main stages totally(not include side stages).
◎ Crews ( equipment) system.
◎ Camouflage system of tanks.
◎ A complete storyline.
◎ Complete sound effect and SFX.”

“Panzer Knights may be priced higher with the release of new contents.”

“We plan to use Steam Community to interact with our users. We will sort out and reply suggestions carefully. Any feedback and opinion about game is useful for us, and we are grateful to improve the game with players.”
Read more 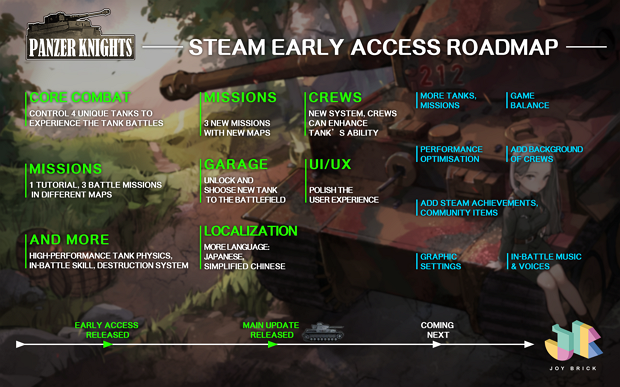 Panzer Knights is an action game about tanks.
Players will play as German faction, control tanks to cross from Western to Eastern Europe, from Battle of France to Eastern Front. Fully experiences the epic and powerful Tank battles through the detailed tanks.

There are many types of mission objects in the vast battlefield. Breaking through the lines of defense, defending the important positions, or defeating the enemies that keep coming.

In games, you can call the bombs or air supply, fix your tank when it's damaged, and switch the formation quickly according to the situation of the battlefield. Players must use every method to conquer the missions.