“We have been developing our game for about 2 years now and have a small community from our closed alpha that really enjoys playing the existing core gameplay loop. While the core gameplay is already fully developed, many advanced feature still need implementation. The feedback from our community has often surprised us and made us re-evaluate our priorities, and as a result, we are eager to open the conversation up to a broader audience. There are many directions the game could take from here and we hope to see what players will enjoy and what additional features they would want us to prioritise.”

“This is difficult to say. At the moment, we are expecting further development to roughly take one year, but this timeline could change depending on how the game is received by the community and what features we ultimately include.”

“Some of the bigger points we have on our roadmap are:

Depending on community feedback, we may prioritise some over others, and may decide to drop some of these points in favour of some that are yet to crystalise. We are a team of two, developing this game part-time after work, so at the moment, we are expecting that we will have to narrow our focus to create a polished but smaller game, focusing on 2 or 3 of the above points. Should we get sufficient support to allow us to work on this full-time, we will likely be able to include more of the features, and create a broader experience for a wider audience.

Regardless, the final product will be a game that provides a rewarding experience for the player and will be centered around the idea of smart re-investment of your money. The end goal and context will be adjusted based on player feedback, but could potentially be more focused on base building, exploration, PvP multiplayer, or a co-op campaign.”

“At the moment, we have a solid core gameplay loop based on placing buildings, re-investing coin to improve production, and basic military units. We have a robust logistics system, and have worked hard on making the balance of first person view and RTS style gameplay as seamless as possible. The game can turn very competitive when played against others, and can be a very calm citybuilding experience when played in singleplayer. There are some bugs that can require some player intervention to recover (e.g. bringing the last 5 wood to a building for it to get finished), but we have not had gamebreaking bugs for some versions and are ironing out issues with every release. Many aspects of gameplay are random, such as loot and ore vein spawns, the seed market, or player position, so some of our players have already put dozens of hours into the game at this point.”

“We want to charge players for what is already in the game, so we intend to raise the price with major updates as seems appropriate.”

“We have a discord server that we primarily use for active discussion on the game's development, and are also engaging with feedback on a range of other social media such as reddit or youtube. Especially on discord, we have a dedicated channel for player feedback, and we regularly ask our players for their opinion on upcoming features or more recent inclusions. We have also repeatedly joined our players in multiplayer games to understand their experiences in real time. Based on the community's feedback, we will adjust our priorities and potentially add or remove features from the roadmap.” 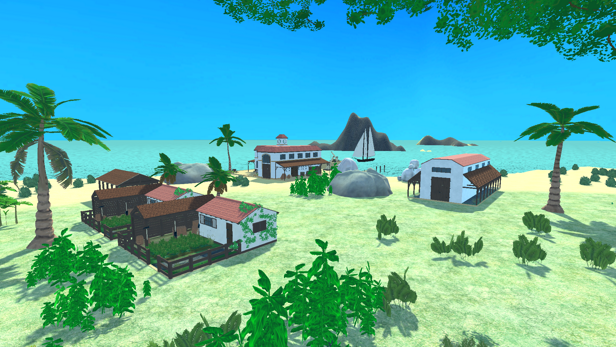 In Path to Prosperity, you are sent to the small village on a newly discovered island in order to develop the settlement and create a thriving industry. In order to win, you have to amass wealth, and send a predetermined amount of coin back to your homeland. But every development costs coin, and you have to constantly assess whether an investment is going to pay off for you in the long run. You start with only few houses and villagers, and let your people collect food and resources for you until you can support more villagers. Build up your logistics and start producing goods you can sell. Continuously increase the size of your economy and settlement, and make sure you can defend what you have created, while ensuring you are more efficient than your opponents!

While you only have pirates to content with in singleplayer, you can play against up to 3 friends in multiplayer. The first to send home the agreed upon amount of coin wins - but if you do too well, your competitors may choose to spend their coin on soldiers to attack you. Every investment needs to be weighed and often the person who seemed to be falling behind can end up on top. 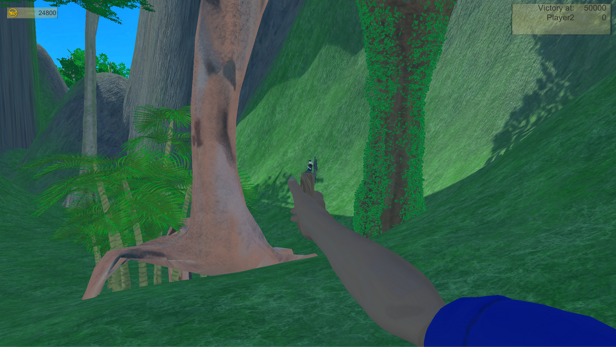 In Path to Prosperity, you are thrown into the shoes of a commander on an island - with all advantages and disadvantages this brings with it. Unlike in a traditional RTS, you can't zoom out to get a better feeling for the land, or see an opponent's army advance from halfway across the map. So exploration, anticipating your opponents moves, securing chokepoints, and staying on top of what is happening on the island is paramount to secure victory. Having your boots on the ground also means that you can quickly leap in to make important changes, however, so you can cut down a tree if your villagers are slow to collect wood; you can build that house next to your new mine; or take out a gun to help fend off the pirates - just make sure to not get distracted from the bigger picture!

The most efficient way of getting things done on the island is by using your villagers to collect resources, produce goods, and defend what you have created. Every house you place provides additional room for villagers, and every villager uses food. Make sure that your food production and deliveries to your markets are always secure to avoid your peoples' starvation. Should your villagers die, they will come back on the next ship - but you will have to reallocate their jobs and the disruption may just mean that your competitors overtake you. Once your settlement is large enough, you can use buildings like the bathhouse or cafe to increase your peoples' productivity and make your city look much more appropriate for your achievements.

Every island has riches hidden in the jungle. A node system spawns random loot, ore veins, and pirates of different value and threat throughout the map. Exploring the island can not only give you a better lay of the land, but can also provide your settlement with early advantages, or lead to the discovery of a gold or gem vein that you can exploit. But balance your exploration carefully - the existence of a rich vein is not guaranteed, and you may be better off managing your settlement instead. Conversely, ignoring what the island has to offer may allow your competitors to win without your intervention.

Traders offer seeds for nutritional and luxury crops at your port. The seeds are randomised in each game and you have to adapt to what is available. The market is also limited in quantity, so any seed you buy is unavailable for your competitor and vice versa. Choose carefully whether you invest in a crop early on, or whether it is better for you to go with cheaper, less profitable industries to begin with. Additional crops will become available to you when you have submitted a quarter, half, and three-quarter of the required coin to your Queen, so time your submissions to reap the most rewards. 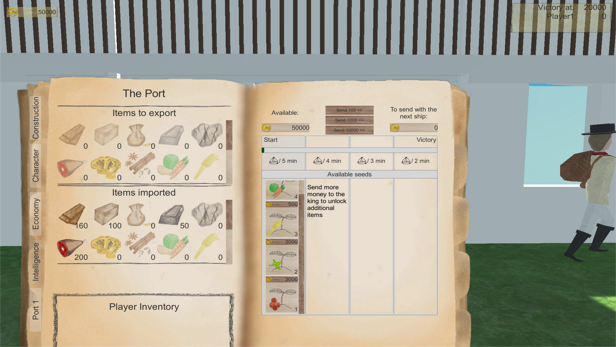