Boppio is a game about obtaining materials, constructing buildings, and assembling a spaceship to return home. In order to succeed you will need to automate and optimize your base. Mine minerals and combine them into new items that will help you build your return vessel.
Reviews
All Reviews:
Positive (20) - 80% of the 20 user reviews for this game are positive. (80% of 20) All Time
Developer :
Boppy Games, LLC
Publisher :
Boppy Games, LLC
User Tags
Popular user-defined tags for this product:
Early Access Simulation Base Building Resource Management Mining City Builder Co-op Online Co-Op Management Multiplayer Singleplayer Building 3D Third Person Procedural Generation Realistic Sci-fi Modern Inventory Management Indie
+

“We have been conducting a closed access playtest for the last 4 months now and we've taken in feedback from over 700 players. We are ready to move into a new testing phase where the game will be available to everyone in Early Access.

The small community we have built over the last couple of months has been critical in quickly improving the game, and we would like to expand this community. We are very active in our Discord and we livestream the development of the game every week on Twitch. Even if you just want to stop in and say hi or report a bug, we always appreciate it when players give feedback, so please stop by and say hi :)”

“Boppio will be in Early Access until April 2022. We have been working on Boppio since April 2020 and we expect to take another year to fully complete this game.

The small community we have built has really encouraged and motivated us throughout this process to continue improving and expanding the scope of Boppio - we originally only wanted to spend 8 months on the development of this game. We have now taken a much longer-term vision and we’re extremely excited to continue working on Boppio for another year to come.”

“We are planning on having about 4 times the amount of content in the full release compared to the current version. This content will be released on a monthly basis over the next year. Most of this content is already planned out and on a specific schedule, as you can see in our 2021 roadmap on boppygames.gg.”

“We will keep the steam page up-to-date as much as possible, but a roadmap of our planned features, which receives frequent updates, is available on our website: boppygames.gg.

The current state of Boppio contains about 10-15 hours of content for a full playthrough. If you are more familiar with the factory building genre you can finish it in less time. The world is completely procedurally generated so the replayability of the game should be great as well for players who want to keep playing and improve their playstyle.

We will continue to push out more content updates on a monthly basis over the next year, so every month there will be more content for players to discover.

We try to keep backwards compatibility intact for most updates, but there will be some updates that may break your save file. However, you will be able to roll back your game version in Steam if you would like to continue playing on the old version. We will try to include automatic upgrades for players moving from one version to another.”

“It's likely that the price of the game will not change, unless we do an occasional sale or special event (in which the price may be reduced for a short time).”

“The Boppio community has been the foundation of the game over the last few months. We have taken feedback from over 700 players and the enthusiasm and encouragement we’ve gotten from our community has confirmed that we are committed to Boppio in the long term.

We have even started live streaming some of the development of the game, which can be found on our Twitch channel. We will have streams in the future where we will directly interact with our community about certain topics like game balance and new features. We frequently get small requests from our Twitch chat that we end up integrating into the game.

We also have a community Discord server that can be found here: https://discord.com/invite/yY9wHNn”

Boppio is a factory building and automation game where you mine resources, construct buildings, automate your factory, and build a spacecraft to return home!

Find ore and construct miners to mine it. Construct more miners to scale your factory!

Send materials into space to construct your return vessel! 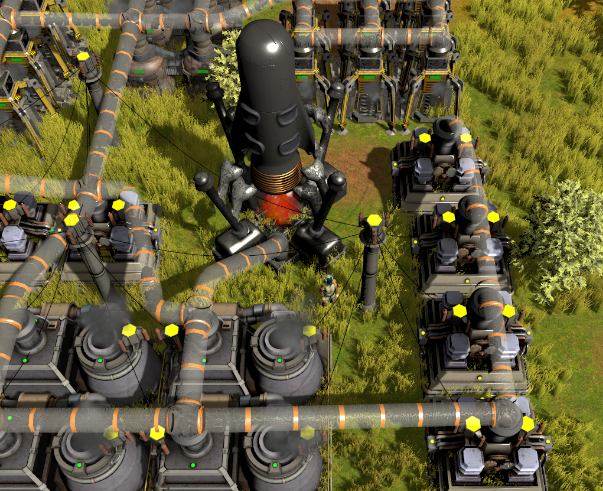