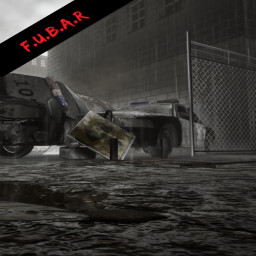 “Early Access Gives the consumer something to play with and watch the improvements overtime, this is no different. I would like to get feedback from the consumer to make the game overall more enjoyable.”

“The game plans to be released fully somewhere in late 2021.”

“The full version is planned to have over 10 maps, 25 guns, and different types of zombies with different animations/ai.”

“The price of the game upon being released as a "full version" is planned to be a 20% increase from its current price point.”

“Players may post in the community discussions and I will respond to their inquiries. There is also planned to have a direct discord associated with F.U.B.A.R in the near future.”
Read more

It's exactly what the title states, the world is pure F.U.B.A.R. From grandma having a heart attack only to wake up a second time and eat her grandkids, to that one guy you knew from high school that had way too much to drink and tried to fight what he thought was a hobo.
Come together and fight with your friends against never ending waves of the undead.. or go solo and take on the treacherous horde. Play from 6 selected survivors with a selection of weapons.. however those weapons will cost you points. Points in which you get from slaughtering never-ending flesh eating monstrosities that were once human.

With new features coming with every update.

The act of killing zombies, blood, gore, violence with weapons