CRASH: Autodrive - Prologue
Developer
Studio Nightcap
Publisher
Studio Nightcap
A demo of CRASH: Autodrive! When your self-driving Autocab kills a cyclist, it's up to you as Emily Knight to talk with fellow passengers and use the clues you find to contradict their lies as you unravel how you ALL could possibly know the victim and have a motive for murder - even the car!
All Reviews:
1 user reviews - Need more user reviews to generate a score
Release Date:
Developer:
Studio Nightcap
Publisher:
Studio Nightcap
Tags
Popular user-defined tags for this product:
Adventure Visual Novel Indie Sci-fi Mystery Interactive Fiction Investigation Choices Matter Immersive Sim Conversation 2D Casual Simulation Comic Book Cartoony Funny Colorful Futuristic Crime Singleplayer
+
Reviews
All Reviews:
1 user reviews () All Time

This is the FREE prologue demo for CRASH: Autodrive!

PLEASE NOTE: The final game has a lot more polish than this old prologue build! :-)


CRASH: Autodrive is a narrative adventure set in the near future where nobody drives and self-driving Autocabs rule the city streets. It's just a normal day when four strangers get into an Autocab, but they are quickly thrust into danger when the car impossibly hits a cyclist. When they exit the car, they discover they all know the victim and they all have a motive for murder! Even the car's artificial intelligence!

You play as Emily, a young woman from a small town trying to make it in the big city. You will get to know your fellow passengers, and the car's A.I. as you investigate clues, solve puzzles, and use the clues you find to contradict lies, explore new conversations, and piece together the mystery of who killed Thomas Sinclair! 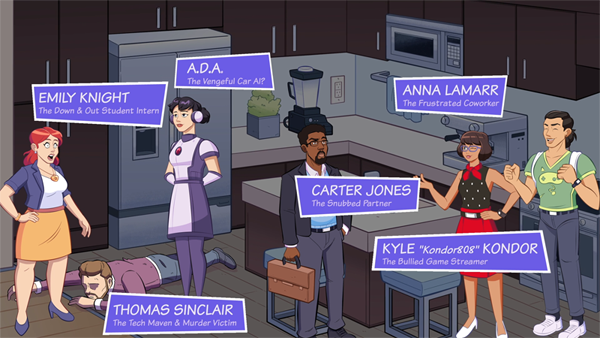 The down-and-out college student who needs to break out of her small-town shell.

The charismatic tech maven, inventor of the Autocab's artificial intelligence, but now stuck in middle management at Vanguard Global Industries.

The A.I. psychologist and frustrated co-worker of Thomas Sinclair who just wants to move up in her career but keeps hitting a glass ceiling.

Get to know your fellow passengers!

Contradict their lies with the clues!

Find out who killed Thomas Sinclair in this short narrative adventure murder mystery.