The game takes place in a weird universe inspired by Treasure Planet, various ancient mythologies, and the Gospel of the Flying Spaghetti Monster. It is inhabited by unique alien races and controlled by two human superpowers locked in a cold war that is about to explode.

Amidst all this mess, you control a team of space pirates, and your goal is to plunder the Galactic Federation spaceships and convoys, smuggle various illegal goods, and search for alien technologies to upgrade your ship. But be wary, the enemies know your tricks, so you better develop unique tactics against each of the enemies and bosses.

The story revolves around four main characters - a gruesome self-loathing captain with a bunch of actual skeletons in his closet, a schizophrenic underappreciated young engineer who searches for his long-gone cat because he can't grasp the concept of death, a timid young cadet accused of intergalactic terrorism who seeks to restore her memory and find out the truth about her past, and a time-traveling mast duck who has seen the end of the galaxy in the near future and is henceforth determined to prevent it. Each with their own secret goals in mind, they seem to forget they are on the same boat.

With the help of this unprecedented crew, you must collect 10 powerful alien artifacts, take control of a primordial alien weapon, and stop an ancient evil from obliterating the galaxy... Or sell the weapon to whoever offers more for it. 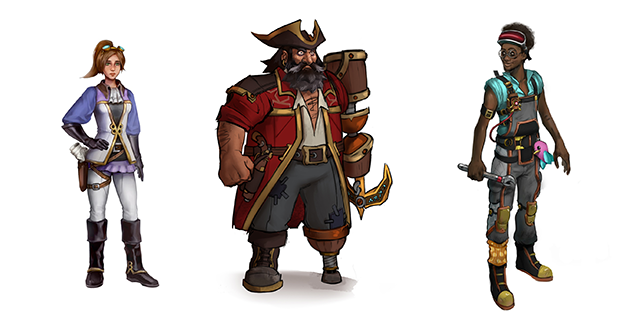 Ready or not, hoist the damn sails!