“In order to get feedback from our players, we are constantly optimizing and tweaking the content and experience of the game, so we decided to launch the game in Early Access.
We are a team of two. This is our first game with a long-term. Therefore, player feedback is very important to us. We will keep interacting with players and keep up with our latest developments in a timely manner. We also look forward to every player’s comments and suggestions, which are very valuable to us.”

“Compared to the early access version, we expect the full version of the game to include:
1. Complete multiple game characters.
2. Richer and more reasonable content of cards, items and artifacts.
3. A richer adventure world.
4. The story is richer and more interesting.
5. More challenging modes”

“The early access version will include the following:
1. The main adventure in 3 chapters.
2. The complete card experience of the warrior character.
3. Monsters and bosses with distinctive characteristics.
4. Collect a wealth of items and artifacts, and combine them to form your own combat strategies.”

“The latest development progress of the game will also be synced to players on official twitter (@SupernatureStu1). Every time the game completes a stage of development, we will also post the latest development diary on BiliBili (@Hellson_008), facebook (Supernature Studio) to share with everyone.
When there is a version update that needs to be released, we will post detailed content update announcements on the Steam community and all the above platforms.””

Hello~ We are a team of two: Supernature Studio. We are very happy to announce our new game here.

Lost In Fantaland is a retro pixel-style roguelite game that blends deckbuilding and turn-based strategies on a checkerboard.
You can choose Warrior, Mage or Deceiver to explore the randomly generated world and fight on a 8x8 checkerboard.
You can build your powerful deck and collect a wealth of items and secret treasures in the adventure.
Go and defeat your enemies one by one!

1. The great blends of deckbuilding and checkerboard strategy creates a fresh feeling.

3. Each adventure in the randomly generated world will be different and fresh. 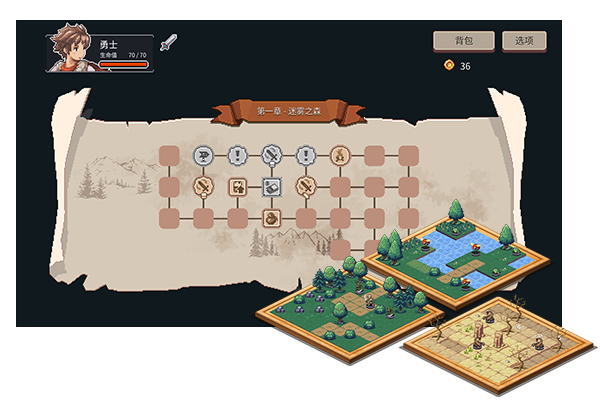 5. A huge amount of cards, items and secret treasures to unlock and use.

6. Persistent upgrades and carryover between runs.

A lot of content is still under development.
If you are interesting of our game, please contact us