I am a single programmer working on the game meaning updates take time and involving community and letting them experiment with the game as i build is the optimal experience for both parties.”

“The game is targeted to be released on Jan 2021 and will remain in early access for the next 7 months as we are developing and changing the game based on the community input.”

“The full version is of the game is targeted to have all playable characters and many different variety of game modes. We are currently working on a MOBA styled game mode.

The single player campaign will be extended to include more maps.

Also a lot more turrets and enemy units might be added to the game.

“The current Alpha V2.7 is released via the Saranity website as early alpha and has full multiplayer support and a game match making lobby. Currently gameplay is limited by only the 3 main characters that are in a playable state. Also the first 3 game modes have been implemented to play single player, coop or Versus game modes. Scoreboard functionality and server hosting functionality is included.

The game is fully functional in the current state.”

“No The game is developed to be for the community as a full free to play game without any in game transactions.”

“community can contact us via the Steam forums, discord channels and website. The idea is also to host community events to have feedback collection and thought sharing.”

The map features a city that is place inside the forest while nightfall is setting in. 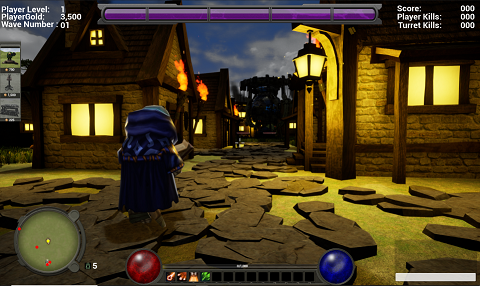 Saranity is a 3rd person game, mixing elements from multiple genres like tower defense, MOBA, Strategy into 1 game. The game features single player, team play in COOP and Team play in Versus game modes making sure you can play with or against your friends.

The main goal of Saranity is to hold of a incoming wave of ever increasing enemies from destroying you central tower. You do this by either attacking the units directly or by building a maze of towers. In Versus the teams that holds out longer will win the round. Killing enemies earns you gold that you can use to buy new towers, upgrade towers or place simple path blockers. When playing in versus you share the same map and can travel to the enemy team to have PVP combat and earn gold to spawn additional boss units to the enemy side.

The game is really about bringing back a little bit of the old game play styles where gameplay was focus of the game. This game is completely free and without any in game transactions. It is build for the community.

This game is being developed as a free to play game.